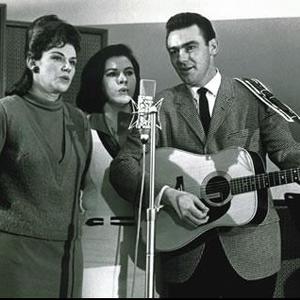 There are three bands under the name The Browns. 1) The Browns were an American family singing group from Pine Bluff, Arkansas made up of Jim Ed Brown and his sisters, Maxine Brown and Bonnie Brown. Country music singers, they sang individually at rural venues until 1954 when Maxine Brown, and younger brother Jim Ed, signed a record contract as a singing duo. Eighteen-year-old Bonnie joined the group in 1955, and the following year they were signed by Chet Atkins, RCA Victor Records producer in Nashville, Tennessee.

1) The Browns were an American family singing group from Pine Bluff, Arkansas made up of Jim Ed Brown and his sisters, Maxine Brown and Bonnie Brown.

Country music singers, they sang individually at rural venues until 1954 when Maxine Brown, and younger brother Jim Ed, signed a record contract as a singing duo. Eighteen-year-old Bonnie joined the group in 1955, and the following year they were signed by Chet Atkins, RCA Victor Records producer in Nashville, Tennessee. The family trio recorded several songs that met with only modest success until 1959, when their 45 rpm folk single called "The Three Bells" was a no. 1 hit on both the Billboard Hot 100 pop music and country music charts. Based on a song called "Les trois cloches," the song was originally a hit in France for both the group Les Compagnons de la chanson and ?dith Piaf.

The Browns followed up the success of "The Three Bells" with "Scarlet Ribbons" and "The Old Lamplighter," recordings that also did very well on both the pop and country music charts. With an international following, The Browns toured Europe extensively and recorded further moderate successes on the country music charts. In 1963, they became part of the Grand Ole Opry.

Jim Ed has also hosted the syndicated country shows Jim Ed Brown's Country Place, and Nashville On The Road. On The Nashville Network he hosted the talent show You Can Be A Star, and the travel show Going Our Way which featured his wife, Becky, where they went traveling to different places in an RV.

Maxine Brown briefly had a solo career during the late 1960's releasing an album and single for Chart Records titled "Sugar Cane Country".

In 2006, the Browns reunited to perform "The Old Lamplighter" and "The Three Bells" for the PBS special, Country Pop Legends.

2) A horror-themed punk band. Formed in 1998, they played consistently for a year and a half around Western Canada, opening for The New Bomb Turks, Nashville Pussy, AFI, and Good Riddance. In the spring of 1998 the band self-released their first album "Getting Jiggy with The Browns". At this time, the line up was much different; Charlie - Guitar & Vocals, Emmett - Guitar, Leroy - Bass, Freddy - Drums and Lucy - Keyboards.

During the summer of 1998 Lucy and Emmet left the band, Freddy moved to Guitar and a new drummer named ODB began performing live shows, a new keyboard player was not sought out. Also around this time Charlie gave up his guitar duties and focused solely on lead vocals.

In 1999 Meter Records (Canada) released "Greatest Hits Volume One." Shortly after the release The Motherfucking Browns played what they said was their "final" show (summer of 1999) much to the dismay of both Meter Records and the Western Canadian music scene.

With the success of Tony Hawk's Underground a new website for the band was announced as well as a new myspace site. Both sites confirmed The Motherfucking Browns were performing with a new line-up: Charlie - Vocals, Eddie - Guitar, James - Bass, Joe - Drums.

2004 saw the release of "And Now the Screaming Starts!" on Meter Records (Canada). After much publicity, and several live shows in the Mid West USA, Horror High Records released their single "The Scream on Halloween" on their "Prom Queen Massacre" compilation, featuring other horror-rock bands such as Blitzkid and Calabrese.

After nearly three years of no activity Meter Records reported that The Motherfucking Browns have returned with the original line up that played on "Greatest Hits Volume One" (except ODB who had since passed away, and replaced by Chow Yun). In the fall of 2007 The Motherfucking Browns played a triumphant "comeback" show in their hometown of Calgary, Alberta, Canada. Performing alongside fellow horror rockers Forbidden Dimension. In an interview with Beatroute Magazine a new album for 2008 was announced.

The band is known for their abrasive stage shows, wearing Balaclava ski masks on stage, and songs primarily about horror movies. Charlie Brown is also a contributing writer for horror website www.killerfilm.com

"The best band in the fucking world, you fuckers!"

3) The Browns, a gospel-influenced band, exude excitement on the stage and offer a life-changing experience to all who hear them. The Browns deliver the powerful message of the gospel through word and song that engage audiences of all ages.

The Browns have been touring across the United States since the group began its full-time ministry nine years ago. The heralded group began on the local and state level and has expanded and grown into a national touring group.

This year The Browns received the prestigious honor of Top 10 Mixed Group of the Year for the second year in a row. The Browns will be attending the Singing News Magazine fan awards at the National Quartet Convention in Louisville, KY. ?It started out with the Singing News magazine fans voting for the top ten,? Michaela said. ?We had no idea we were up for this ward until we got an e-mail to tell us. We were up with some wonderful groups. This honor is very rewarding coming from the fans and knowing that we've touched their hearts or ministered to them in some way.? Previously The Browns had been awarded the Top Horizon Group of the Year for 3 consecutive years.

The group has finished their newest recording at the Sound Kitchen and Daywind Studios in Nashville, TN with Grammy award winning producer, Bubba Smith. ?A New Day? will be the Browns 10th national CD release. The newest single on the album has just climbed to #25 on the national radio charts. It is written by group member Jessica, and her fiance, Nick Trammell intitled ?It's A God Thing?.

...and now the Screaming Starts