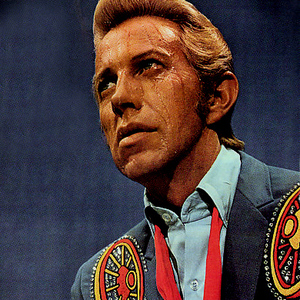 Porter Wayne Wagoner (August 12, 1927 ? October 28, 2007) was an American country music singer. Famous for his flashy Nudie suits and blond pompadour, Wagoner introduced a young Dolly Parton to his long-running television show. Together, "Porter and Dolly" were a well-known duet team for many years. Parton wrote the song "I Will Always Love You" after Wagoner suggested she shift from story songs to focus on love songs.

His first band, The Blue Ridge Boys, performed on radio station KWPM from a butcher shop in his native West Plains, Missouri where Wagoner cut meat. Wagoner's big break came in 1951, when he was hired as a performer by station KWTO in Springfield, Missouri. This led to a contract with RCA Records. With lagging sales, Wagoner and his trio played schoolhouses for the gate proceeds.

In 1953, his song entitled "Trademark" became a hit for Carl Smith, followed by a few hits of his own on RCA. He was a featured performer on ABC's Ozark Jubilee and moved to Nashville and joined the Grand Ole Opry in 1957.

The Porter Wagoner Show ran on syndicated television from 1960 to 1981. There were 686 thirty minute episodes filmed, the first 104 being shot in black and white, the remainder in color. At its peak, it was featured in over 100 markets, with an average viewership of over three million. Reruns of the program currently air on the rural cable network RFD-TV.

Wagoner brought James Brown to the Grand Ole Opry, produced a rhythm & blues album for Joe Simon, and appeared in the Clint Eastwood film Honkytonk Man. [1] During the mid 1980s, Wagoner formed an all girl group called The Right Combination which was named after one of Porter and Dolly Parton's hit records. He also hosted "Opry Backstage" during the 1990s on The Nashville Network where he interviewed guests. Though Parton's departure caused some animosity on both sides, the two reconciled in the late 1980s and have appeared together a number of times in the years since; Parton inducted Wagoner into the Country Music Hall of Fame in 2002.

Wagoner made a guest appearance on the HBO comedy series Da Ali G Show, being interviewed by the fictional character Borat, in its second season.

On July 14, 2006, Wagoner was hospitalized and underwent surgery for an abdominal aneurysm.

On June 05, 2007, Wagoner released his final album called Wagonmaster. The album was produced by Marty Stuart for the Anti-label. This album received the best reviews ever in Porter's career and briefly charted on the country charts.

Wagoner also toured during the summer of 2007 to promote the album. One of these was opening for the rock group The White Stripes at a sold-out concert at Madison Square Garden in New York City.

Wagoner's publicist Darlene Bieber announced on October 19, 2007 that the singer had been hospitalized and was in very serious condition. WSMV-TV reported that Wagoner was admitted earlier that week for observation from an illness. Bieber gave no further information but said that the country star was asking for prayers from his family and fans.

On October 21, 2007, his publicist confirmed that Wagoner had been diagnosed with lung cancer.

On October 26, 2007, Porter was released into hospice care. He died two days later in Nashville, Tennessee. Wagoner's funeral was held on November 1, 2007 at the Grand Ole Opry House followed by interrment at the Woodlawn Memorial Park Cemetery in Nashville.

Up until his illness and death, he appeared regularly on the Grand Ole Opry and toured actively.