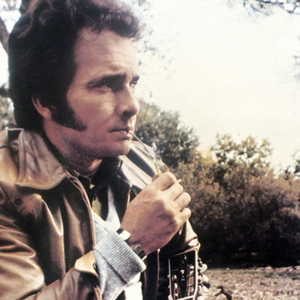 Merle Ronald Haggard, born April 6, 1937 in Bakersfield, California is an American country music singer and songwriter. He has become one of the true giants of country music, and along with Buck Owens helped create the Bakersfield Sound, which is characterized by the unique twang of Telecaster guitars, harmonies, and a rough edge not heard on the more polished Nashville recordings of the time. After spending his early life drifting in and out of jail Merle attended three of Johnny Cash's concerts at San Quentin Prison.

Seeing Cash perform inspired Haggard to straighten up and pursue his singing career.

Perhaps Merle came to prominence to many in 1966 with 'Swinging Doors' and 'The Bottle Let Me Down'. Although not his first hits, they were among three hits he had that year in the Top Ten. Later hits followed, including 'Branded Man', 'I Threw Away the Rose', 'Mama Tried', 'Today I Started Loving You Again', 'Working Man Blues', 'The Fightin' Side of Me', 'Okie from Muskogee' and 'If We Make It Through December'. The last two songs seem also to have had a major impact in America. The former song spoke particularly to political conservatives and to military folk. It perhaps also spoke to majority anti-hippy feelings at the time. The latter song's effect in 1975 is described below.

Merle Haggard was pardoned in 1972 by California Governer Reagan for his past crimes. "If We Make It Through December" was a classic song that really touched the depth of the poverty of some in recession times. In 2005 he released "Chicago Wind" which included an anti Iraq war song.

I Am What I Am