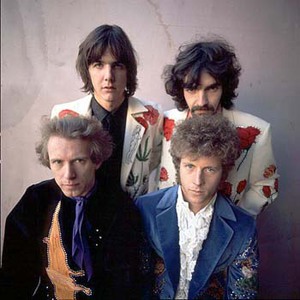 Kleinow and Ethridge instigated a reformation of the band in 1975 which continued through 1984. The band was reformed once again in 1985 and were disbanded for a final time in 2001.

The band best known as the "Flying Burrito Brothers" actually 'borrowed' their name from the original "Flying Burrito Brothers", composed of bassist Ian Dunlop and drummer Mickey Gauvin, bandmates of Parsons from the Boston-based International Submarine Band, plus any of a loose coalition of musicians, including Parsons himself from time to time. In a deliberate choice of focusing on just creating and playing music without the distractions of the music industry, in 1968 the original Brothers moved from Los Angeles to New York City. From this base they continued to tour the Northeast playing their eclectic traditional/rockabilly/blues/R&B-oriented version of rock, using the name "The Flying Burrito Brothers East" after Parsons' group became famous.

Meanwhile, on the West Coast, Parsons and guitarist/mandolinist/bassist/vocalist Chris Hillman thought this same moniker would be perfectly suited to the band they had been dreaming of since early 1968, when, as members of Roger McGuinn's band The Byrds, they created one of the first country-oriented rock albums, Sweetheart of the Rodeo. They immersed themselves in their vision in their house in the San Fernando Valley, dubbed "Burrito Manor", even replacing their wardrobe with a set of custom country-Western suits from tailor to the C&W stars, Nudie's Rodeo Tailors (Parsons's had marijuana leaf embroidery) and began a period of intensely fruitful creativity. At this juncture, the band also included pianist/bassist Chris Ethridge and pedal steel guitarist "Sneaky" Pete Kleinow.

Their first album The Gilded Palace of Sin (1969) did not sell terribly well, being a radical departure from anything most of the record-buying public (either rock or country) had ever seen, but the group had a cult following which included several famous musicians, such as Bob Dylan and The Rolling Stones. Parsons soon became friends with Keith Richards of the Rolling Stones and left the group after 1970's Burrito Deluxe, which also saw the departure of Ethridge and addition of guitarist/dobro player/vocalist Bernie Leadon and drummer Michael Clarke (of The Byrds). Rick Roberts replaced Parsons and released a self-titled album with the group in 1971. Kleinow then left to become a session musician and Leadon joined The Eagles. Al Perkins and Roger Bush replaced them, and Kenny Wertz and Byron Berline joined as well, releasing The Last of the Red Hot Burritos (1972), a live album. The band fell apart. Hillman and Perkins joined Manassas, while Berline, Bush and Wertz formed Country Gazette. Roberts reassembled a new group for a 1973 European tour, and then began a solo career before forming Firefall with Michael Clarke.

As Gram Parsons's influence and fame grew, so did interest in the Flying Burrito Brothers, leading to the release of Honky Tonks (1974), a double album, and the recreation of the band by Kleinow and Ethridge in 1975. Floyd "Gib" Gilbeau, Joel Scott Hill and Gene Parsons (no relation to Gram) also joined, and the band released Flying Again that year. Ethridge was then replaced by Skip Battin for Airborne (1976), followed by an album of unreleased early material, Sleepless Nights. For the next few decades, the group released albums and toured and had a country hit with "White Line Fever" (1980, a cover by Merle Haggard) and then became the Burrito Brothers. Headed by prolific songwriter and ace guitarist John Beland and Gib Guilbeau, and normally featuring Sneaky Pete, this incarnation scored moderately well on the Country charts in the early 1980s. Through numerous incarnations (including Brian Cadd for a time), the band released albums and toured throughout the 1980s up till 2001 when John Beland "officially" ended FBB. While the bands work during the 1980-1999 period was exceptional, after 1984 none of the many releases had any chart impact. Sneaky created a Burritos spinoff in his new band Burrito Deluxe, which featured Carlton Moody on lead vocals and Garth Hudson from The Band on keyboards. While a good band, there has never been any real continuity with the true Burritos and this group can not be considered anything more than a spinoff. Pete however, left the band due to illness in 2005, leaving no direct lineage to the original masters.

Gram Parsons died on September 19, 1973. "Sneaky Pete" Kleinow died on January 6, 2007. Chris Hillman is still a very successful singer-songwriter, having been part of Souther-Hillman-Furay, McGuinn-Clark-Hillman, then going on to form the Desert Rose Band (1986-1993) with Herb Pedersen. He still sings with Pedersen today as Chris and Herb, having released "The Other Side" (2005).

Farther Along: The Best Of The Flying Burrito Brothers