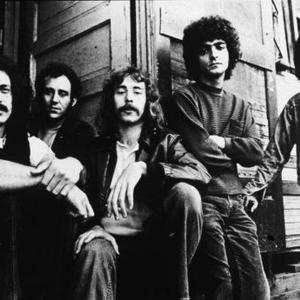 Crazy Horse is a rock band best known for its long association with Canadian singer/songwriter Neil Young, despite having released five albums of its own over a 19-year span. It has been co-credited with Young as Neil Young and Crazy Horse on 12 albums, from Everybody Knows This Is Nowhere (1969) to Greendale (2003), and has made contributions to an additional 10 albums by the singer, including his three compilations.

Crazy Horse has also released 5 albums of its own. They have received inconsistent critical reaction, partially due to the band's frequent and radical lineup changes; though bassist Billy Talbot and drummer Ralph Molina appear on every album, no other member of the band appeared on more than one. The band's first and best-received self-titled album also featured Jack Nietzsche, Nils Lofgren, and Danny Whitten, who became the topic of various Neil Young songs after his heroin overdose in late 1972. On Crazy Horse's 1972 album, "Loose," they were all replaced with John Blanton, Greg Leroy, and George Whitsell, who was a member of Crazy Horse's predecessor The Rockets. Crazy Horse's third album also released in 1972, "At Crooked Lake," replaced those three with Rick and Mike Curtis.

Later that decade in 1978, Crazy Horse released another album under its own name entitled "Crazy Moon." This would feature, along with the steady Billy Talbot and Ralph Molina, some guest work by Neil Young and guitarist Frank Sampedro, who had joined the band in 1975 for Young's album "Zuma." This lineup would be used for many of Crazy Horse's albums with Neil Young through the rest of the 1970s, 80s, and 90s. In the late 1980s, Young used Frank Sampedro in his R&B-styled Bluenotes backing band, but did not use Molina or Talbot as he thought their style was unfitting. Now without Sampedro, Crazy Horse recruited Sonny Mone and Matt Piucci for their most recent album, "Left For Dead," released 1989. Piucci would later play on Billy Talbot's 2006 solo release. The album's title track is a pointed remark about their frustrating relationship with Young in the late 1980s, and included a number of other references to Neil Young and his work. Curiously, Neil Young wears a Left For Dead undershirt on his DVD "Silver and Gold."