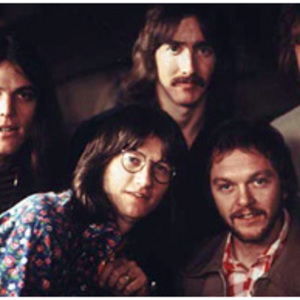 Poco, founded in 1968 by Rock and Roll Hall of Famers Richie Furay and Jim Messina (both inducted 1997 with Buffalo Springfield), was one of the earliest in the "country rock" genre that was later commercially popularized by bands such as the Eagles. The band was completed by Rusty Young (pedal steel guitar, dobro, banjo and mandolin) Randy Meisner on bass and George Grantham on drums. Poco's 1969 debut, "Pickin' Up the Pieces" (the title being a reference to the break-up of Buffalo Springfield), received some critical acclaim but generated very litttle enthusiasm commercially.

It was later given five stars in The Rolling Stone Record Guide of 1979.

Poco's back catalogue includes a wide variety of styles, from 60's folk rock to 70's hard rock and from country to electric pop. The band's three first albums, "Pickin' Up The Pieces (1969)", "Poco (1970)" and "Deliverin (1970)'" all share a joyful, slightly psychedelic atmosphere. For some fans, this was the real Poco.

Guitarist/songwriter Paul Cotton's joining Poco then brought more variety and also considerably more rock punch to the band on "From The Inside (1971)", "A Good Feelin' To Know (1972)" and "Crazy Eyes (1973)" .

However, a disappointed Furay departed , lamenting that the band had not increased it's audience since it's inception..

Poco left Epic after Cantamos and signed with ABC-Dunhill Records. Head Over Heels was their first ABC release, featuring Schmit's acoustic "Keep On Tryin'", which became the group's most successful single to date, charting at #50 on the Billboard Hot 100. Around the time of the release of Head Over Heels, The Very Best of Poco was released as a compilation album that documented the group's years with Epic. Epic's release fought with Head Over Heels for attention though neither charted very well, hitting #43 and #90, respectively.

The group's next ABC-Dunhill album was Rose Of Cimarron which also failed to generate much enthusiasm and peaked at #89. Another Epic release also came out in 1976, the live album Live. Indian Summer was released the following spring, reaching #57.

In August 1977, Schmit quit to join the Eagles, coincidentally replacing former Poco member Meisner yet again. As a result, a possible new live album was cancelled by ABC. After languishing in storage for many years, the album was eventually released as The Last Roundup in 2004.

After Schmit's departure, Poco decided to take a break. Grantham took some time off, while Young and Cotton decided to continue as the "Cotton-Young Band". They added Steve Chapman (drums) and Charlie Harrison (bass) to round out their new quartet. However, ABC decided to pick up the Cotton-Young album ? as long as they continued under the 'Poco' name. Thus, although Grantham had never quit Poco, he found himself bought out of the group. He subsequently landed a job as drummer for Ricky Skaggs.

The new Poco couldn't have started much better, since "Legend (1978)" became band's first hit album with two TOP-20 hits. The album is very different from everything Poco had so far done and the hard rocking title track hinted for what was to follow.

The joy was short lived, however. In the 1980s, the group released five more albums: Under The Gun (1980), Blue And Gray (1981), Cowboys & Englishmen (1982) on MCA and, moving over to Atlantic Records, Ghost Town (1982) and Inamorata (1984). Poco failed to duplicate the success achieved by Legend, with each album doing more poorly than its predecessor.

After poor commercial success, Poco went into hiatus until the original line-up surprised everyone with new album "Legacy (1989)". It was also a hit album with another TOP20 hit single "Call it love". The album to many listeners was a welcome return to band's original country rock style. This line-up didn't last, however, and only recorded this one album. This wasn't the end of Poco, though. The band, now again Cotton & Young -lead, continued gigging and even made a new studio album "Running Horse" in 2002, which failed to gather much acclaim.

On March 11, 2010, Cotton departed the band . Keyboardist Michael Webb from Nashville TN joined the band and Poco continued to tour.

Plans are underway for a new CD in early 2011 as well as a tour.

Read more about Poco at http://www.poconut.org.

The Songs Of Paul Cotton (Remastered)

Under The Gun & Blue And Gray