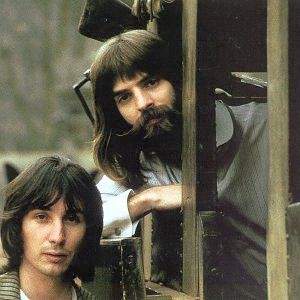 Loggins & Messina are an American rock music duo consisting of Kenny Loggins and Jim Messina. They are noted for popularizing the subgenre of Yacht rock (the form of "soft rock" that was the subject of the video series with that title), which soon became prominent in the 1970s. In late 1970 Jim Messina, formerly of Poco and Buffalo Springfield, was working as an independent contract record producer for Columbia Records.

In late 1970 Jim Messina, formerly of Poco and Buffalo Springfield, was working as an independent contract record producer for Columbia Records. It was then that he met a little-known studio artist who had written a few songs of his own, Kenny Loggins. Loggins was working as contract songwriter for The Nitty Gritty Dirt Band.

Messina decided to produce Loggins' debut album. By the time all was said and done, Messina had contributed so much to the album, both instrumentally and vocally, that the effort was more of a Kenny Loggins album with Jim Messina sitting in. Thus an accidental duo was born. Their harmonies meshed so well that what was begun as a one-off album became an entity unto itself. So rather than simply producing Kenny Loggins as a solo act, in 1971 they both decided to form a duo, Loggins and Messina.

Over the course of the next four to five years they produced five original material albums, one album of covers of other artists' material and two live albums. One compilation album, a "best of", would be released after the duo had separated.

As is natural in most mentor type relationships, Loggins outgrew the duo over time. Within a few years he would feel the need to spread his wings and fly by his own right, and by 1976 the pair separated and pursued successful solo careers, with Loggins soon achieving the super-star status that he sought.

They reunited in 2005 for a compilation album of their greatest hits, which proved so successful that they decided to tour as a group again. The "Sittin' In Again" tour was launched in mid-2005 and played out the remainder of the year, proving that they hadn't lost the magic that made them famous in the first place.

Their backing band changed from album to album. Many albums featured backing members who were well know in their own right, such as Stephen Stills who contributed to their self-titled second album. Bryan Adams played guitar on the album Full Sail. John Townsend and Ed Sanford, later of the Sanford Townsend Band (Smoke from a Distant Fire) contributed vocals and songwriting to the Native Sons album.

Live: Sittin' In Again At The Santa Barbara Bowl

The Best: Sittin' in Again