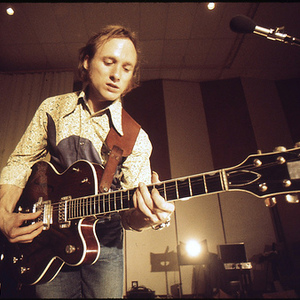 Stephen Arthur Stills is an American guitarist and singer-songwriter best known for his work with the Buffalo Springfield and Crosby, Stills, Nash & Young. Stephen Stills was born in Dallas, Texas on January 3, 1945 to a military family. Moving around as a child, he developed an interest in blues and folk music. He was also influenced by latin music after spending his teenage years in Costa Rica and the Panama Canal Zone, where he graduated from high school.

Stephen Stills was born in Dallas, Texas on January 3, 1945 to a military family. Moving around as a child, he developed an interest in blues and folk music. He was also influenced by latin music after spending his teenage years in Costa Rica and the Panama Canal Zone, where he graduated from high school.

Stills dropped out of the University of Florida to pursue a music career in the early 1960s. He played in a series of unsuccessful bands including The Continentals, which featured future The Eagles guitarist Don Felder. Stills eventually ended up in a nine-member vocal harmony group, the house act at the famous Cafe Au Go Go in NYC, called the Au Go Go Singers (Rick Geiger, Roy Michaels, Michael Scott, Jean Gurney, Kathy King, Nels Gustafson, Bob Harmelink, Richie Furay & Stills) where and when he met Richie Furay. This group also did some touring in the Catskills, and in the South, released one album in 1964, then broke up in 1965. Afterwards, Stills, along with four other former members of the Au Go Go Singers: Geiger, Michaels, Gurney & Scott, formed The Company, a folk/rock group. Immediately prior to performing in the Au Go Go Singers, Stills could be seen singing solo in Gerde's Folk City, a well-known coffee house in Greenwich Village. The Company embarked on a 6-week tour of Canada where Stills met a young guitarist named Neil Young. On the VH1 CSNY Legends special, Stills would say that at that time, Young was doing what he always wanted to do, "play folk music in a rock band." The Company broke up in New York within four months, opening up the way for Geiger to join a light opera company in Los Angeles; Michaels to link up with Jimi Hendrix, Gurney to go on to college while doing TV commercials, and Scott to tour with a retro-Highwaymen. Stills did session work and went to various auditions (including an unsuccessful one for The Monkees). In 1966 he convinced a reluctant former Au Go Go Singers, Richie Furay, then living in Massachusetts, to move with him to California.

In the wake of CSNY's success, all four members recorded solo albums. In 1970, Stills released his self-titled debut, which featured guests Eric Clapton, Jimi Hendrix, "Mama" Cass Elliot, and Ringo Starr (credited only as "Richie") as well as contributions from various members of the CSNY band. It provided Stills with the hit single "Love The One You're With" as well as the concert favorite "Black Queen." Stills followed this with Stephen Stills 2, which featured "Change Partners." Nash saw this song as a metaphor for the many relationships in CSNY, while Stills viewed the band as something much less bland and repetitive.
The next year, Stills teamed up with ex-Byrd Chris Hillman and several CSNY sidemen to form the band Manassas. During a Manassas tour in France, Stills met and married French singer-songwriter Veronique Sanson. Then he switched to Columbia Records, where he recorded two albums: Stills in 1975 and the punningly titled Illegal Stills in 1976. The former record found Stills in an uncharacteristically joyful mood; his marriage was going great, his son Chris had just been born, and he was happy living in Colorado. "To Mama From Christopher and the Old Man" was an exceptionally optimistic view of his new family.
In 1976, Stills attempted a reunion with Neil Young. At one point, Long May You Run was slated to be a CSNY record, but when Crosby and Nash left to fufill recording and touring obligations, according to both David and Graham the other pair wiped their vocals from the recordings, as Stills and Young decided to go on without their erstwhile partners as The Stills-Young Band. However, Young would leave midway through the resulting tour due to an apparent throat infection. Stills was contractually bound to finish the tour, which he did, but upon returning home, his wife announced she wanted a divorce and wished to move back to France. Stills reunited with Crosby and Nash shortly afterwards, thanks to the efforts of Nash's future wife Susan, who got Nash to forgive Stills for wiping the Crosby and Nash vocals from Long May You Run. This led to the semi-permanent CSN reunion of 1977, which has persisted even though all three have released solo records since then.
In 1997, Stills became the first person to be inducted into the Rock and Roll Hall of Fame twice in the same night for his work with CSN and the Buffalo Springfield.
2005 saw Stills release 'Man Alive'; his first solo offering in 14 years. Although not troubling the chart compilers, the record was critically well received and is regarded by many fans as his best since the mid seventies.

Stills was the inspiring influence for Ray LaMontagne who, after hearing one of his songs, decided to quit his job and focus on music.

Turnin' Back The Pages