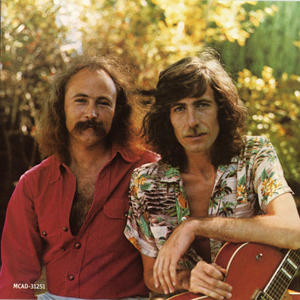 Crosby & Nash is a duo formed by David Crosby and Graham Nash during a Crosby, Stills, Nash & Young hiatus. After the success of D?j? Vu, all four members of CSNY released solo albums. Crosby released If I Could Only Remember My Name, while Nash released Songs for Beginners. In the autumn of 1971 the best friends toured together as an acoustic duo to favorable reviews; consequently, in 1972 the two decided to record an album together and the result was Graham Nash David Crosby.

After the success of D?j? Vu, all four members of CSNY released solo albums. Crosby released If I Could Only Remember My Name, while Nash released Songs for Beginners. In the autumn of 1971 the best friends toured together as an acoustic duo to favorable reviews; consequently, in 1972 the two decided to record an album together and the result was Graham Nash David Crosby. The album reached #4 on the American Billboard charts and ensured that the twosome were still a viable draw without the more successful and prolific Stills and Young. Further work together was precluded by the CSNY reunion of 1973-1974, Nash's solo effort Wild Tales, Byrds' reunion album, and Crosby's ongoing collaboration with early electronica artist and Grateful Dead associate Ned Lagin.

Deciding to continue working together, the two signed a contract with ABC Records and began recording what would become Wind on the Water. However, Stills and Young invited the duo to recording session for their duo album Long May You Run. Crosby & Nash were forced to leave the recording session because they had a duo album due for ABC Records and Stills and Young wiped their vocals from Long May You Run instead releasing it as The Stills-Young Band. Crosby & Nash said that they wouldn't work with either Stills or Young again.

Crosby & Nash ended up releasing three albums for ABC. Wind on the Water came out in 1975 and was followed the next year by Whistling Down the Wire and Crosby-Nash Live in 1977. All three albums featured a backing band called The Mighty Jitters featuring: Russ Kunkel (drums), Tim Drummond (bass), Craig Doerge (keyboards), Danny Kortchmar (guitar), and David Lindley (guitar/violin). Famed session bassist Leland Sklar alternated with Drummond in the studio. All of these musicians were among the most in demand in Los Angeles at the time, and the line-up of Kunkel, Doerge, Kortchmar, and Sklar had previously recorded as The Section. Depending upon avaliability of the various members, the twosome would either tour as a full blown electric-based aggregation or in a semi-acoustic format with Doerge and Lindley. When CSN reunited on a more or less permanent basis in 1977, Doerge would follow the group to Miami for the CSN sessions, contributing to several songs and collaborating on the song "Shadow Captain" with Crosby. Crosby and Doerge would continue to collaborate regularly until the early 1990s.

In addition to their album work, Crosby & Nash were the harmony vocalists of choice for a number of prominent singer-songwriters and AOR rock performers in the mid to late 1970s. Among their most recognizable session work is Joni Mitchell's "Free Man in Paris" and the James Taylor hit "Mexico". They also appeared on albums by Dave Mason, J.D. Souther, Elton John, Art Garfunkel, Gary Wright, Carole King (who sat in with them at various concerts), The Section and latest on David Gilmour's 2006-album On An Island.

In 1979 they reconvened to record a new album for Capitol Records, but sessions were dampened by Crosby's increased dependence upon freebase cocaine; this was eventually released as Nash's Earth & Sky without any songs from Crosby. The CSN album Live It Up was also supposed to be a Crosby & Nash record, but Atlantic Records refused to release anything that didn't feature the full CSN trio.

In 2004, Crosby & Nash released their first studio record since 1976 with the double-album Crosby & Nash. The album featured Crosby & Nash backed mostly by members of Crosby's solo band CPR. A single CD version was released in 2006 when CSNY began its "Freedom of Speech '06" tour.

Whistling Down The Wire (Vinyl)