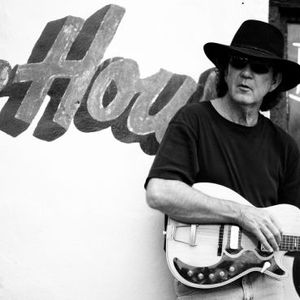 In 1969, deep voiced southern songsmith Tony Joe White from Oak Grove, Louisiana had a U.S. Top 10 hit with his classic swamp rock tune "Polk Salad Annie".White continues to tour and record into the 21st century, and his bluesy songs have been covered by dozens of artists ranging from Elvis Presley and Tim McGraw, to Dusty Springfield and Tina Turner. His latest release in a forty plus year career is 2010's "The Shine".

Born in 1943, White was the youngest of seven children in a part-Cherokee family raised on a cotton farm, and first showed an interest in music at the age of 16 when he heard an album by Lightning Hopkins. He later began performing at school dances and night clubs, first as Tony and the Mojos and then as Tony and the Twilights.

After moving to Memphis in the late 1960's, White was signed to Monument records and his first single release was a Ray Stevens song "Georgia Pines".

White's 1969 debut album, Black And White, featured originals such as "Willie And Laura Mae Jones" and "Polk Salad Annie," and psychedelic ode to the west coast "Soul Francisco" which became a hit in France. The album also featured a cover of Jimmy Webb's "Wichita Lineman". His follow up record for Monument was "...Continued" followed by Tony Joe in 1970, his last for Monument.

By 1970 he released The Train I'm On marking the fifth album in Tony Joe White's career, and his second recorded for Warner Bros. it was produced by Jerry Wexler and recorded at the legendary muscle shoals studio in Alabama. Johnny Cash had White as a guest on his tv show twice, and in Europe White gained legendary status following a successful debut at the historic Isle of Wight Festival in 1970. White's 2nd record on Warner Bros. in 1971 was a self titled disc recorded in Memphis with The Memphis Horns.

In late September 1973, White was recruited by producer Huey P. Meaux to sit in on the legendary Memphis sessions that became the landmark Southern Roots album of Jerry Lee Lewis.

By all accounts, these sessions were a three day, around the clock party, which not only reunited the original MGs (Steve Cropper, Donald "Duck" Dunn and Al Jackson Jr. of Booker T. and The MGs fame) for the first time in three years, they also featured rockabilly icon Carl Perkins, Mark Lindsay (of Paul Revere and The Raiders), and Wayne Jackson and The Memphis Horns.

Throughout the 1970s and 1980s White toured in support of artists including Creedence Clearwater Revival and James Taylor. In the 1990s Tina Turner recorded four of his songs for her multi-platinum selling album Foreign Affairs, including the world-wide hit "Steamy Windows". With the advent of that project, White formed an alliance with Turner's manager, Roger Davies and his career began to soar.

In 1991 he signed with Remark, issued the Closer To The Truth album and spent the next two years touring Europe in support of Eric Clapton and Joe Cocker, among others. He cut two more albums for Remark, 1993's Path Of A Decent Groove and 1995's Lake Placid Blues, the latter garnering the first of two nominations for "Best R & B Album" from the Nashville Music Awards, (the second being, The Best Of Tony Joe White, a 1996 retrospective of his work on Warner Brothers). French audiences eagerly embraced White as the ?Swamp Fox' and in 1998, he became the subject of a French produced documentary: Tony Joe White-The Man From Down South.

In 1999, White went back to his roots and recorded One Hot July, in the swamps of Louisiana. He then toured Australia and Europe once again in support of the critically acclaimed album. In 2001, Audium and Koch Entertainment released The Beginning - a stripped-down acoustic album that received worldwide recognition and five star ratings in virtually every country.

Throughout the years, White has had songs recorded by dozens of major artists including Elvis, Ray Charles, Joe Cocker, Etta James, Hank Williams Jr, John Mayall, and Waylon Jennings. Brook Benton had a huge hit with Rainy Night In Georgia, and Rory Gallagher did a cover of White's song "As The Crow Flies" on his live album Irish Tour. More recently, White has worked with Marc Bryan of Hootie & The Blowfish and Michael McDonald. He has written and performed jingles for McDonalds and Levi's 501 Blues and been featured on movie soundtracks for Millennium, Selena and Hotspot. His music has also been featured in two HBO original films, and has a DVD out entitled Live from Austin, TX. in 2006 Rhino records compiled all of White's late 60's Monument albums into a deluxe ltd edition 40 CD boxset called "Tony Joe White - Swamp Music: The Complete Monument Recordings"

Another recent CD release is Heroes and Heroines, on his own label, Swamp Records. White says he created the company with his son Jody White, so that he could continue to produce music his way. His "Uncovered" came out in 2006 and features collaborations with Mark Knopfler, Michael McDonald, Eric Clapton, Waylon Jennings & Shelby Lynne.

White has played recent high profile slots including the 2008 New Orleans Jazz Fest and on In July 14, 2006 in Magny-Cours, France, as a warm-up act for Roger Waters' Dark Side Of The Moon concert.

Smoke From The Chimney