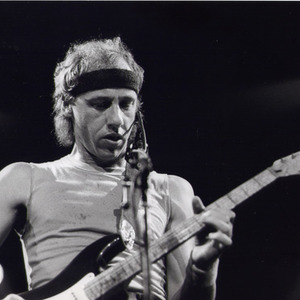 Mark Freuder Knopfler, OBE (born August 12, 1949, Glasgow, Scotland) is a guitarist, singer, and songwriter. Although best-known as the lead guitarist and vocalist for the band Dire Straits (1977 - 1995), Mark has also made albums as a solo performer and played in other bands (such as the Notting Hillbillies). He has also performed on work by other artists, such as Bob Dylan, Eric Clapton and Chet Atkins, and produced albums for artists such as Tina Turner, Randy Newman, and (again) Bob Dylan.

In addition, he has scored the music to several films, including Local Hero, The Princess Bride, Comfort and Joy, Cal, Last Exit to Brooklyn and Wag the Dog.

After Knopfler disbanded Dire Straits in 1995, he launched straight into a solo career with 'Golden Heart' (1996) - a mixture of his various music stylings that appeared throughout Dire Straits' career.
'Sailing to Philadelphia' (2000) was the breakthrough album for his solo career. With stars such as James Taylor and Van Morrison, 'Sailing to Philadelphia' was one of his most successful albums to date.

His next album 'The Ragpicker's Dream' (2002) saw Knopfler move to the 'story telling theme'. The single 'Why Aye Man' was used as the theme tune for the third series of 'Auf Wiedersehen, Pet' in 2002.

His next album 'Shangri-La' was released in 2004 with a tour proceeding in 2005. 'Shangri-La' continued the idea of storytelling with each song having a different story (e.g. Boom, Like That is referring to the story of Ray Kroc and McDonalds). A motorcycle accident in 2005 meant the tour was postponed but was continued later that year.

2006 saw the release of 'All the Roadrunning' - a collaboration album with Emmylou Harris. This contains a mixture of rock and folk-styled music, mostly written by Knopfler. A tour followed the release of the album.

'Kill To Get Crimson', another folk-rock-bluesy record was released in autumn of 2007,
with a tour in 2008.

Get Lucky album released in September 2009, with a tour planned for North America and Europe commencing in the spring of 2010.

Knopfler was named #27 on Rolling Stone magazine's list of "100 Greatest Guitarists of All Time".

In 2011, Mark toured with Bob Dylan on Dylan's recent European leg of his "Never Ending Tour".

Mark is currently in his studio recording new album, "Privateering". It will be released on 3rd September of 2012.

Down The Road Wherever (Mastered By Bob Ludwig Box Set)

Down The Road Wherever (Deluxe Dition)