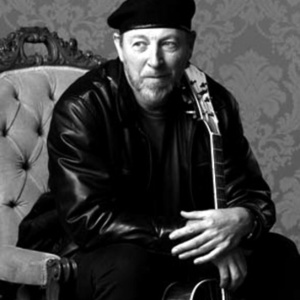 Richard Thompson OBE (born 3 April 1949, Notting Hill, London) is a British singer/songwriter and guitarist. Highly regarded for his guitar techniques, Thompson was awarded the Orville H. Gibson award for best acoustic guitar player in 1991. Similarly, his songwriting has earned him an Ivor Novello Award and, in 2006, a lifetime achievement award from BBC Radio. Thompson made his debut as a recording artist as a member of Fairport Convention in September 1967. He left the group in 1971 and began recording with his wife as Richard & Linda Thompson, before their marriage dissolved in 1983.

Since then, Thompson has maintained a critically-acclaimed solo career.

He continues to write and record new material and performs live frequently throughout Canada, the United States, Europe and Australia.

Thompson was appointed Officer of the Order of the British Empire (OBE) in the 2011 New Year Honours for services to music. On 5 July 2011, the degree of Doctor of Philosophy honoris causa was conferred on Thompson by the University of Aberdeen, in a ceremony at the University's Elphinstone Hall.

Across A Crowded Room Live At Barrymore's 1985 CD2

Across A Crowded Room Live At Barrymore's 1985 CD1