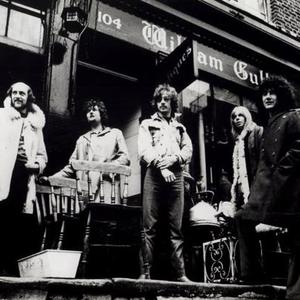 The STRAWBS was a 60's folk and medieval band that turned prog-rock with the help of Dave Cousins and Rick Wakeman. Wakeman is featured on the albums "Strawbs", "Dragonfly", "Just A Collection of...", and "From The Witchwood" before he joined Prog rock supergroup YES. The group ceased to exist at the end of the 1970s. A reunion on Rick Wakeman's TV show Gas Tank in 1983 resulted in an invitation to reform to headline 1983's Cambridge Folk Festival.

The Grave New World line-up plus Brian Willoughby (who had replaced Lambert when he left in 1978 during the making of Heartbreak Hill, and had also begun a partnership with Dave Cousins as an acoustic duo from 1979 onwards) went on from there to perform occasionally in the UK, US and Europe over the next few years, replacing Weaver with Chris Parren from the Hudson Ford band and Ford himself (when he relocated to the US) with bass player Rod Demick.
1993 saw the band touring in the UK for their 25th anniversary, but the next few years proved rather quiet. Until 1998, that is, when Cousins staged a 30th anniversary bash in the grounds of Chiswick Park in London, which saw several different line-ups of the band perform on a bright summer's day in the open air. The final line-up of the night ? the Bursting at the Seams line-up plus Willoughby ? became the ongoing version of the band, with annual tours in 1999, 2000 and 2001.
The latest incarnation of the band with Oliver Wakeman on keys released a studio album Dancing to the Devil's Beat in late 2009.

Hero And Heroine In Ascencia