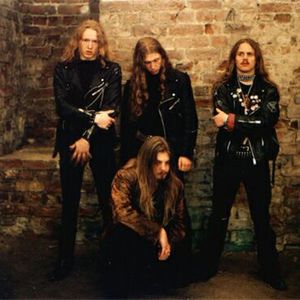 There are at least two bands known as Decameron; an English folk-rock band active in the late 1960s and in the 70s; and a Swedish metal band formed in 1991. 1. Decameron was born out of the ashes of Nocrofobic in 1991. The band members have been involved in several metal acts before they created Decameron. Back than the line-up was ; Alex Losb?ck (Bass/Vocals), Johannes Losb?ck (Guitar/Vocals), Johan Norman -(Guitar), And Tobbe Kellgren (Drums).

1. Decameron was born out of the ashes of Nocrofobic in 1991. The band members have been involved in several metal acts before they created Decameron. Back than the line-up was ; Alex Losb?ck (Bass/Vocals), Johannes Losb?ck (Guitar/Vocals), Johan Norman -(Guitar), And Tobbe Kellgren (Drums). Progress was made while finding the Decameron style. The result was their debut demo "My Grave is Calling", released in early 1992. They made several of gigs and the response was very satisfying. A deal with Corpse Grinder records for a 7"ep was planned, but due to Corpse Grinders deceiving and lying tongues the 7"ep was never released. In autumn of 1994 Johan decided to leave Decameron for a position in another band (Dissection). After a while, with Dark from Lord Belial as a session guitarist, Jonny Lehto joined and the line-up was complete again. The recording of their debut album "My Shadow..." could finally begun in the summer of '95. After the recording of "My Shadow..." Tobbe left the band. Jonnu have also departed due to personal problems within the band. Although line-up problems have accrued, the music of Decameron will always be inspired of such acts as; Morbid Angel, King Diamond, Bathory, At The Gates and early Death without copying their music or style. Even such stages as pain, grief and hate inspires Decameron.

2. Formed in Cheltenham, England 1968. Decameron played contemporary folk-rock music, much of which was written by key members Dave Bell and Johnny Coppin. The group recorded for a variety of British labels during the early seventies and later on also performed some American doo wop tracks under the name The Magnificent Mercury Brothers. The band fused together rock and folk in their own individual and distinguishable style.
Band Members:
Dave Bell: Vocals, bass and guitar. One half the great songwriting team Bell/Coppin.
Johnny Coppin: Vocals, piano and guitar. Other half the great songwriting team Bell/Coppin.
Al Fenn: Lead guitar, mandolin, bass, vocals .
Geoff March: Cello, violin, organ, whistle, saxophone and vocals.
Dik Cadbury: Lead guitar, acoustic guitar, violin, bass and vocals. Joined after the first album
Bob Critchley: Drums. Joined for the last album in 1976
Timmi Donald: Drums on the first album. Never a permanent member.
Pat Donaldson: Bass on the first album. Never a permanent member.
John Halsey: Drums and percussion on the second and third albums. Never a permanent member.