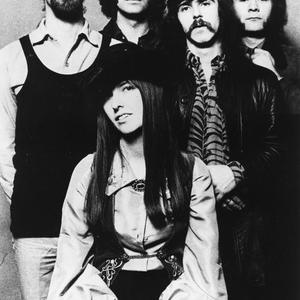 Steeleye Span formed in 1969 from members of Fairport Convention and out of the ashes of Sweeney's Men creating a distinctive fusion of both British folk with electric rock music. The resulting first version of the band was formed by ex-Fairport bassist Ashley Hutchings and built around two pairs of vocalists, Tim Hart and Maddy Prior and Gay & Terry Woods. Rhythm was to be supplied largely by Hutchings' bass, and without drums.

Tensions between the band grew during the production in 1970 of their first album, Hark! The Village Wait to the point where they never again worked together after its completion, but the music itself shows no signs of these difficulties. While having a rock sensibility there is a greater sense of the authentic folk tradition than even in the best of Fairport, and a particular beauty arising from the two pairs of voices. The Woods being replaced by admired folk stalwart Martin Carthy, with violinist Peter Knight to widen the musical textures, the group late in 1970 recorded their most admired record Please to see the King. Ten Man Mop followed in 1971, more accomplished but generally felt to be less exciting. The expensive gatefold sleeve swallowed the band's royalties, and was referred to as a tombstone, since Hutchings and Carthy then left, to pursue Hutchings' new vision of a specifically English strand of folk rock with The Albion Band, and Steeleye Mk 2 folded.

However the inclusion of the less celebrated and more rock orientated replacements Rick Kemp and Bob Johnson led to the most commercially successful phase in the band's existence, vocalist Maddy Prior becoming the primary focus of the band, and a run of well received albums, from Below the Salt and Now we Are Six, their first with drummer Nigel Pegrum, to their eighth, and most commercially successful, All Around my Hat, in 1975.

Still active, they have a claim to be one of the longest-lived and perhaps the most commercially successful of all the folk rock bands of the era, thanks to their hit singles Gaudete and All Around My Hat, 3 top 40 albums and even a certified "gold" record with All Around My Hat.

Now We Are Six Again CD2

Now We Are Six Again CD1

Please To See The King CD2

Please To See The King CD1