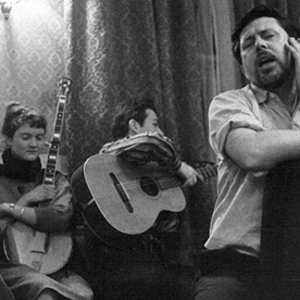 Ewan MacColl (born James Henry Miller in Salford, Lancashire, on 25 January 1915; died 22 October 1989) is recognised as the father of the British folk revival. The writer of classics such as "Dirty Old Town" and "The First Time Ever I Saw Your Face" (which won him a Grammy in 1972), MacColl partnered Peggy Seeger and was father to musicians Kirsty MacColl, Neill MacColl and Calum MacColl, and grandfather to Bombay Bicycle Club's Jamie MacColl.

Innovative and inspiring, both collecting traditional songs, as well as writing new ones. He was, and remains, a very influential artist, writer and singer, committed to social issues. He travelled around the world collecting and recording songs.

Married to Peggy Seeger, he reportedly sang his most famous song - 'The first time ever I saw your face' - to her over the telephone during a transatlantic phone call.

His song 'Dirty Old Town' has been recorded hundreds of time, notably by The Spinners (the British folk group), Rod Stewart, The Pogues, Townes Van Zandt, The Specials, the Mudmen.

He was father to musicians Kirsty MacColl, Neill MacColl and Calum MacColl, and grandfather to Bombay Bicycle Club's Jamie MacColl.

MacColl and Seeger recorded several albums of political commentary songs. MacColl himself wrote over 300 songs, some of which have been recorded by as diverse as Roberta Flack, Planxty and Johnny Cash. In 2001, The Essential Ewan MacColl Songbook was published, which includes the words and music to 200 of his songs.

There is a plaque dedicated to MacColl in Russell Square in London. The inscription includes: "Presented by his communist friends 25.1.1990 ... Folk Laureate - Singer - Dramatist - Marxist ... in recognition of strength and singleness of purpose of this fighter for Peace and Socialism". In 1991 he was awarded a posthumous honorary degree by the University of Salford.

MacColl was very politically active and as well as political song he was a playwright and one of the founders of the Communist backed 'Edinburgh People's Festival' from 1951-54. The EPF was a victim of McCarthyism but provided the blueprint for today's Edinburgh Festival Fringe.

Musical Film Score: Whaler Out Of New Bedford, And Other Songs Of The Whaling Era (With Peggy Seeger & A.L. Lloyd) (Vinyl)