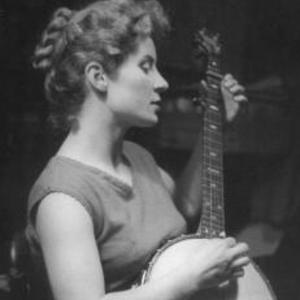 Shirley Collins MBE (born Shirley Elizabeth Collins on 5 July 1935 in Hastings, Sussex) is an award-winning British folksinger who was a significant contributor to the English Folk Revival of the 1960s and 1970s. She often performed and recorded with her sister Dolly Collins, whose accompaniment on piano and portative organ created unique settings for her sister's plain, austere singing style. Collins's seminal recording is considered by many to be 'Anthems in Eden', released in 1969. With her second husband Ashley Hutchings she created the all-acoustic Etchingham Steam Band.

She was awarded an MBE for services to music in 2006.

Collins and her sister, Dolly, grew up in the Hastings area of East Sussex in a family which kept alive a great love of traditional song. Songs learnt from their grandfather and from their mother's sister, Grace Winborn, were to be important in the sisters' repertoire throughout their career.

On leaving school, at the age of 17, Shirley Collins enrolled at a teachers' training college in Tooting, south London. However, in London she also involved herself in the early folk revival and in 1954, at a party hosted by Ewan McColl, she met Alan Lomax, the famous American folk collector, who had moved to Britain to avoid the McCarthy witch-hunt which was then raging in America. Lomax and Collins began a romantic relationship which led to their undertaking a folk song collecting trip in the Southern states which lasted from July to November 1959 and resulted in many hours of recordings, featuring performers such as Almeda Riddle, Hobart Smith, and Bessie Jones and culminated in the discovery of Mississippi Fred McDowell. Recordings from this trip were issued by Atlantic Records under the title "Sounds of the South" and also featured in the Coen brothers' film Oh Brother, Where Art Thou. The experience of her life with Lomax and the making of the recordings in religious communities, social gatherings, prisons and chain gangs was described in Collins's book America Over the Water (published 2004).

Back in Britain, Shirley Collins proceeded with her own singing career, and in a series of influential albums, she helped to introduce many innovations into the English folk revival. In 1964, she recorded the landmark jazz-folk fusion of Folk Roots, New Routes, with guitarist Davy Graham. 1967 saw the essentially southern English song collection, The Sweet Primeroses, on which she was accompanied for the first time by Dolly Collins's portative organ.

In 1969 there was another collaboration, this time with The Young Tradition (featuring Peter Bellamy, Heather Wood and Royston Wood) and Dolly Collins, The Holly Bears a Crown.

Shirley Collins's seminal recording is considered by many to be Anthems in Eden, released in 1969. It featured a suite of songs centred on the changes in rural England brought about by the First World War. Dolly Collins created arrangements featuring David Munrow and various other players from his Early Music Consort. The highly unusual combination of ancient instruments included rebecs, sackbuts, viols and crumhorns and hinted that the guitar was not the only appropriate accompaniment for the folk song. Several critics have suggested that it is impossible to imagine that electric accompaniment for traditional song, as successfully purveyed by Fairport Convention and Steeleye Span, could have developed quite as it did without the pioneering 'Anthems In Eden'.
All these recordings strove to marry a deep love and understanding of the English folk music heritage with a more contemporary attitude to musical settings. Anthems In Eden was followed by Love, Death & The Lady, and No Roses, recorded in 1971 with the Albion Country Band, and a total of 27 musicians.
Shirley Collins married Ashley Hutchings in 1971. He left Steeleye Span and the couple created the all acoustic Etchingham Steam Band with Terry Potter, Ian Holder and Vic Gammon. The Etchingham's repertoire was drawn from the traditional music of Sussex. With The Albion Dance Band, performing traditional material on a mixture of modern (electric) and mediaeval instruments, Shirley Collins recorded The Prospect Before Us.

1978's For As Many As Will was the last studio album recorded by Shirley and Dolly Collins. Shirley Collins soon retired from public performance, although she continues to lecture and to appear on radio as an authority on traditional music.

In 2004, Collins was awarded a Gold Badge by the English Folk Dance and Song Society and became patron of the South East Folk Arts Network in 2006. Also in 2006, Shirley appeared on Black Ships Ate the Sky, finishing the album with a sung version of the poem 'Idum?a'.

Collins was awarded the MBE for services to music in the Queen's New Year's Honours List, announced 30 December 2006. On 14 April 2007, she was awarded an Honorary Degree by the Open University, for a "Notable contribution to education and culture", while in 2008 she was given the "Good Tradition" award at the BBC Radio 2 Folk Awards.

In 2008 Collins was elected as president of the English Folk Dance and Song Society.