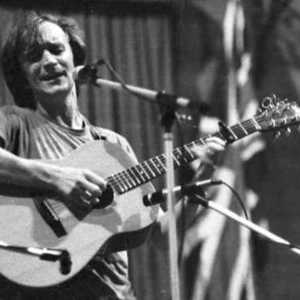 Martin Carthy (born May 21, 1941) is an English folk singer and guitarist who has remained one of the most influential figures in British traditional music, inspiring contemporaries such as Bob Dylan and Paul Simon and later artists such as Richard Thompson since he emerged as a young musician in the early days of the folk revival. He was born in Hatfield and grew up in Hampstead, London. After training as an actor he sang in coffee bars.

He was born in Hatfield and grew up in Hampstead, London. After training as an actor he sang in coffee bars. He became a resident at the Troubador folk club in Earls Court in the late 1950s. He joined Redd Sullivan's Thameside Four in 1961. He is a renowned solo performer of traditional songs in a very distinctive style, accompanying himself on his trusty old Martin Guitar; his style is marked by the use of alternate tunings, and a strongly percussive picking style that emphasizes the melody. His debut album, Martin Carthy, was released in 1965, and also featured Dave Swarbrick playing fiddle on some tracks, although he was not mentioned in the album's sleeve notes.

He has also been involved with many musical collaborations. He has sung with The Watersons since 1972, was an early member of the UK folk rock group Steeleye Span, and was part of the innovative Brass Monkey ensemble, which mixed a range of brass instruments with Carthy's guitar and mandolin and John Kirkpatrick's accordion, melodeon and concertina.

For many years Carthy has enjoyed a creative partnership with fiddle player Dave Swarbrick. More recently, Waterson:Carthy has provided the forum for a successful partnership with partner Norma Waterson together with their daughter Eliza Carthy.

In June 1998 he was awarded the MBE in the Queen's Birthday Honours. He was named Folk Singer of the Year at the BBC Radio 2 Folk Awards in 2002, and again in 2005 when he also won the award for Best Traditional Track for 'Famous Flower of Serving Men'.

The Moral Of The Elephant (With Eliza Carthy)

The January Man: Live In Belfast 1978