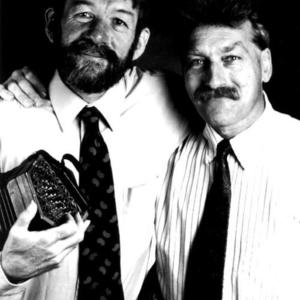 Widely acclaimed for their lively and entertaining presentations of English folk songs, JOHN ROBERTS and TONY BARRAND have performed at major festivals, colleges, clubs and coffeehouses throughout the United States, Canada, and their native Britain. They sing the ballads and songs of the sea, of rural pursuits, of social and sociable situations, of industrial toil and strife, and much more, typically arranging their material thematically to better illustrate the lives and the social history of the people who made and sang the songs.

Their songs are punctuated with tales, monologues, dances and tunes, giving a more complete appreciation of the wealth, diversity, and vitality of the English folk tradition.

John and Tony met at Cornell University in 1968, as fellow graduate students in psychology. They discovered that they shared a common interest in folk song, and started performing together the following year. Unaccompanied two-part singing was always a primary staple of their repertoire, and the stark harmonies of their well-balanced voices soon brought them to the attention of the folk music community. They also draw upon a variety of instrumentation: John is a leading exponent of both Anglo and English concertina, as well as being a fine banjo and guitar player; Tony is a skilled percussionist, on drums, bones and spoons.

Both are active in the folk dance arena as well as in song. Tony is a well-known Morris and clog dancer, and his teaching is in demand across the United States. His recent book, Six Fools and a Dancer, has been hailed as the definitive work on Morris Dance in the United States. John, an able dancer himself, is more often found providing the music on concertina. When not singing or dancing (and often when he is) Tony teaches folklore and aesthetics via the University Professors Program at Boston University; John is a freelance music engraver and desktop publisher.

In their many years together as a professional team, Roberts and Barrand have recorded with a number of companies including Swallowtail, Front Hall, Folk Legacy, National Geographic, and, most recently, Golden Hind. These recordings include a critically-acclaimed album of authentic sea shanties, an album of drinking songs recorded live in a Chicago tavern, An Evening at the English Music Hall, and four albums of songs from their celebrated Christmas pageant, Nowell Sing We Clear. Their latest release (August '92) is a program of English folk songs entitled A Present from the Gentlemen. They have also recorded a selection of the songs that the composer Percy Grainger collected in Lincolnshire during the early years of this century, to be released in the near future. Their next project will be a sequel to an earlier recording of sea songs and shanties.

A Present from the Gentlemen

Mellow With Ale From the Horn