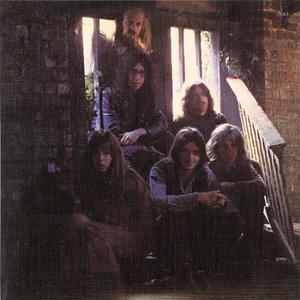 Dando Shaft, named after a character in a novel by Don Calhoun, began as a five-piece folk-band from Coventry, United Kingdom in 1968 and comprised of Kevin Dempsey (acoustic guitar/vocals). Martin Jenkins (vocals, mandolin/fiddle/guitar), Ted Kay (tabla/percussion), Roger Bullen (bass), and Dave Cooper (guitar/vocals). They took acoustic instrumentation and folk roots and created a unique sound of their own, high on musical dexterity and compositional ability.

Their three albums from the early 1970's An Evening With Dando Shaft, Dando Shaft and Lantaloon each unveiled a rich imagination and a fertile plot of musical integrity.

Preferring to play 'unplugged' with none of the instruments electrically amplified, Dando Shaft initiated a unique mixture of acoustic folk with driving rhythms and impeccable inventive musicianship. Using acoustic instrumentation, clear vocals and delectable harmonies allied to complex and unusual yet melodic and lilting song structures they inhabited the land occupied by Pentangle, Fairport Convention, Steeleye Span, The Natural Acoustic Band, Spirogyra and Tir Na Nog, yet there was also something special about Dando Shaft.

The first album was released in 1970 on the Youngblood label, and gained a release in the US through the major MCA corporation. In October 1970, Dando Shaft acquired the services of a female singer, Polly Bolton from Leamington Spa, who had a pure and very expressive voice. Polly had previously sung with June Tabor. A change of label to RCA's short-lived Progressive imprint Neon in 1971 for the second album, Dando Shaft, followed by a release on RCA proper for the third, Lantaloon in 1972.

After the band split in the mid 1975 Martin and Kevin had great success in the band Whippersnapper which also numbered Dave Swarbrick in its ranks. Polly Bolton in turn followed a spell out of the business by launching a successful solo career, initially helped by Ashley Hutchings. A reunion Dando album the critically acclaimed folk/jazz kingdom 1977 featured contributions from Danny Thompson (Bass), John stevens on drums, Tommy Kearton (keyboards) and Paul Dunmall on sax. The last known gig was at Whitefriars monastery, Coventry, May 1993.

Tracks can be downloaded at their offical website,
www.dandoshaft.com

Shadows Across The Moon (Vinyl)