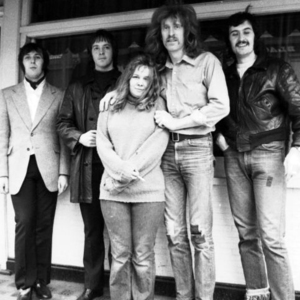 Fotheringay was a short-lived British folk rock group, formed in 1970 by vocalist Sandy Denny on her departure from Fairport Convention. The band drew its name from Denny's 1968 composition "Fotheringay" about Fotheringhay Castle, in which Mary, Queen of Scots, had been imprisoned. The song originally appeared on the 1969 Fairport Convention album, What We Did on Our Holidays, Denny's first album with that group.

The band expressed Denny's vision of the potential of folk rock to express complex meaning and deep personal emotion, using traditional ballad forms, but with the power of a rock band. Their self-titled first album (Fotheringay) was also only one of two albums, as they broke up a year later, in January 1971, while working on their second (recently released). The cause appears to have been personal difficulties, made worse by lack of success and thus income! Oddly for such talented musicians the band were widely reported to have been poor in live performance, which may well have also contributed to their short life as a band. Tracks later surfaced on her three-disc compilation.

The rhythm section was formed by Gerry Conway and Pat Donaldson, lauded by Denny as the best in the business. In the absence of Richard Thompson, who was prepared to tour with her, and act as session musician but wanted to follow his own career, lead guitar was taken by Jerry Donahue, whose transatlantic country roots and softer personality brought a different, less edgy feel to the music. However he was a skilled technician, with great feel, as he showed on their album, and later Fairport Convention records. The group was completed by rhythm guitarist and second lead vocalist Australian Trevor Lucas, whom Denny was to marry, and who also later accompanied her back into Fairport.

Fotheringay contains a majority of tracks by Sandy Denny, with one each by Bob Dylan, Gordon Lightfoot and Trevor Lucas, as well as the atmospheric trad arr. Fotheringay, The Banks of the Nile.

In 2007 the BBC announced that Donahue would be attempting to complete the abandoned project (which he accomplished using previously unheard takes from the original archived tapes). Permission had finally been granted and the work was completed by summer of the following year. The resulting album, titled Fotheringay 2, was released by Fledg'ling Records on 29 September 2008.

Nothing More: The Collected Fotheringay CD3

Nothing More: The Collected Fotheringay CD2

Nothing More: The Collected Fotheringay CD1