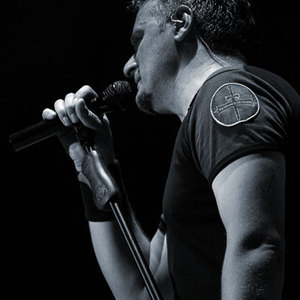 Thompson is a Croatian rock band. The frontman, songwriter and lead vocalist of Thompson is Marko Perkovi?. He is widely considered as to having a right political views, and was the main figure in patriot movement during the Croatian-Serbian war. Thompson is often considered his stage name. The lineup also includes Tiho Orli? as supporting vocalist and bass guitarist, while the remaining members of the bend are less prominent.

The only permanent member of the band is Marko Perkovi?, and he is often identified with the band.
The band line-up on the '' Bilo jednom u Hrvatskoj '' tour is:

The name "Thompson" comes from the Thompson submachine gun, which was Perkovi?'s nickname. Originally from ?avoglave in the Dalmatian hinterland, Perkovi? now makes his home in the Croatian capital of Zagreb. At his last concert there was more than 100 000 people.
Thompson also features annually at the Homeland Victory celebrations in their hometown of ?avoglave. These performances are attended by many visitors, ranging from 60,000 to 100,000 spectators, and feature singers like Mate Buli?, Dra?en Ze?i?, Ivan Mikuli?, and Baruni.

In Croatian music, festivals play a large role, with new songs frequently being released for a festival and the best song being declared winner. Thompson has appeared at the following festivals:

Marko Perkovi? Thompson now preparing a new album and tour on this year.

Lonely And In Love