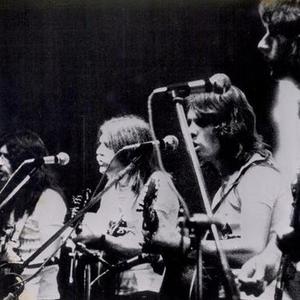 Plainsong was formed by Ian Matthews (previously in Fairport Convention) in 1972 with Andy Roberts, Bob Ronga, and Dave Richards. In Search of Amelia Earhart was released the same year with relatively poor sales. However the critical response was largley positive. Their follow-up, Plainsong III was more country orientated. During its production, Ronga quit and Matthews and Richards were unable to agree on future direction. They disbanded before the album's completion. The early 90s brought renewed interest in the band, with several subsequent releases:

The band have been quiet since, however their debut continues to be very highly thought of.

Plainsong is also the previous name of the band now called Solstice.

In Search Of Amelia Earhart

In Search Of Amelia Earhart / Now We Are Three CD2

In Search Of Amelia Earhart / Now We Are Three CD1