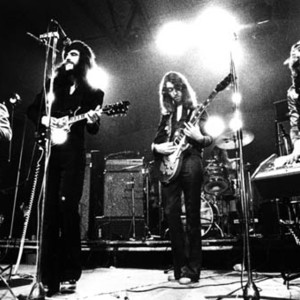 Horslips were a 1970s Irish rock band that composed, arranged and performed their own Celtic rock songs and music based on traditional Irish jigs and reels. They were one of the first, if not the first, of the Celtic rock bands of that era. Formed in 1970, they disbanded in 1980, but recently (in 2005) the original line-up has regrouped and performed a small number of gigs. Band members * Jim Lockhart, from Francis St in Dublin, studied classical music at Trinity College Dublin. He fell under the influence of Sean ? Riada, wanting to build an orchestral sound out of Irish music.

* Jim Lockhart, from Francis St in Dublin, studied classical music at Trinity College Dublin. He fell under the influence of Sean ? Riada, wanting to build an orchestral sound out of Irish music. He played keyboards, pipes, whistles and flute. He did vocals on a select number of songs, mainly in Manx or Irish.

* Eamon Carr is from Kells, County Meath. He started a quarterly literary magazine called The Tara Telephone in Dublin in the late 60s that also ran poetry recitals. He was the drummer.

* Charles O'Connor, from Middlesbrough in the UK played concertina, mandolin, and fiddle (later on he played the electric guitar) and shared the main vocal tasks with Barry Devlin and Johnny Fean.

* Barry Devlin, from Ardboe in County Tyrone once trained as a Franciscan priest. He left this to do English in UCD and then after joined a graphics company as a screenwriter. He was the band's bass player, shared vocals and its unofficial front man.

* Johnny Fean was born in Dublin in 1951 and spent his childhood in the city of Limerick. He soon mastered guitar, banjo, mandolin and harmonica. In his teens, he played in sessions in Limerick and County Clare. He developed his listening tastes from rock to blues and incorporated it into his guitar style. In his late teens he played in a group called "Sweet Street," with Joe O'Donnell on electric fiddle and Eugene Wallace. He later played in "Jeremiah Henry," a rock and blues band. His idols were Jimi Hendrix and Eric Clapton. He left "Jeremiah Henry" in 1970 to play traditional music again in Limerick.

The Man Who Built America (Remastered 1989)

Tracks From The Vaults

Drive the Cold Winter Away

The Book Of Invasions

The Unfortunate Cup Of Tea (Vinyl)