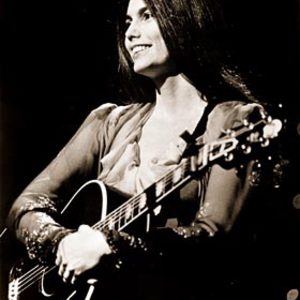 Emmylou Harris (born April 2, 1947 in Birmingham, Alabama) is an American singer-songwriter and musician. In addition to her work as a solo artist and bandleader, both as an interpreter of other composers' works and as a singer-songwriter, she is a sought-after backing vocalist and duet partner, working with numerous other artists including Gram Parsons, The Band, Linda Ronstadt, Roy Orbison, Dolly Parton, Mark Knopfler, Guy Clark, Willie Nelson, Bob Dylan, Rodney Crowell, and Neil Young.

Harris is truly an innovator. For over 30 years, Emmylou has flowed effortlessly between genres achieving popularity in pop, folk, country and now alternative. The common bridge is an exquisite vocal style and a gift for discovering the heart of a song.

Born in Birmingham, Alabama on April 2, 1947, the daughter of Walter and Eugenia Harris grew up near Washington, D.C. As a college student in the late 60s, she sang with a local folk duo and eventually moved to Greenwich Village. She played the clubs on the local folk scene occasionally sharing the stage with Jerry Jeff Walker and David Bromberg.

Discovered in 1971 by Chris Hillman, Hillman brought Gram Parsons to hear her sing in a small club in the Washington D.C. area. In 1972, she answered the call from Gram to join him in Los Angeles to work on his first solo album, "GP." According to Songfacts, Parsons tragic early death in 1973 left Harris at an emotional and musical crossroads. Her earliest signature song, Boulder to Birmingham was written shortly after Gram's death, and it showed the depth of her shock and pain at losing her friend and mentor.

After the loss of Gram, Emmylou went back to the D.C. area and formed a country band, playing with them until her 1975 major label debut, Pieces of the Sky, when she formed the first version of the legendary Hot Band. Over the years the Hot Band included world class players such as Albert Lee, Rodney Crowell and Hank DeVito.

Emmylou has been called by Billboard Magazine a "truly venturesome, genre-transcending pathfinder." Throughout her career, she has been admired for her talent as an artist and song connoisseur, but it was with her 2000 album, Red Dirt Girl, for which Ms. Harris was awarded her tenth (out of eleven total to date) Grammy, that she revealed she is also a gifted songwriter. Continuing the trend with her September 2003 album, Stumble Into Grace, Emmylou wrote ten of the album's eleven tracks. Though Emmylou is the most admired and influential woman in contemporary country music, her scope extends far beyond it. She has recorded with such diverse artists as Ryan Adams, Beck, Elvis Costello, Johnny Cash, Lucinda Williams, Bob Dylan, Tammy Wynette, Neil Young, The Chieftains, Lyle Lovett, Roy Orbison, The Band, Willie Nelson and George Jones.

She sings with Dolly Parton and Linda Ronstadt on the incomparable albums Trio and Trio II, making all three artists living American legends.

A longtime social activist, Harris has lent her voice to many causes. She is active in cultural preservation issues, notably the Country Music Foundation and the Grand Ole Opry. As an animal rights activist and the owner of several dogs and cats, Emmylou also supports PETA (People for the Ethical Treatment of Animals) and the Humane Society. Since 1997 she has been the most visible spokesperson for the Campaign for a Landmine Free World, drawing public attention and notable musical artists to the cause.