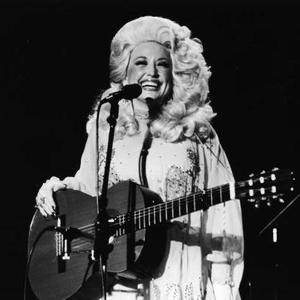 Dolly Rebecca Parton (born January 19, 1946 in Sevierville, Tennessee, U.S.) is an American country singer, songwriter, composer, producer, entrepreneur, author and actress. Parton began performing as a child, singing on local radio and television in East Tennessee. At age 12 she was appearing on Knoxville TV, and at 13, she was recording on a small label and appearing at the Grand Ole Opry in Nashville. When she graduated from high school in 1964 she moved to Nashville, taking many traditional elements of folklore and popular music from East Tennessee with her.

Parton began performing as a child, singing on local radio and television in East Tennessee. At age 12 she was appearing on Knoxville TV, and at 13, she was recording on a small label and appearing at the Grand Ole Opry in Nashville. When she graduated from high school in 1964 she moved to Nashville, taking many traditional elements of folklore and popular music from East Tennessee with her.

Parton's initial success came as a songwriter, with her songs being covered by Kitty Wells, Hank Williams, Jr., Skeeter Davis, and a number of others. She signed with Monument Records in late 1965, where she was initially pitched as a bubblegum pop singer, earning only one national chart single, "Happy, Happy Birthday Baby," which did not crack the Billboard Top 100. Additional pop singles also failed to chart.

The label agreed to have Parton sing country music after her composition "Put It Off Until Tomorrow" as recorded by Bill Phillips (and with Parton, uncredited, on harmony) went to No. 6 on the country charts in 1966. Her first country single, "Dumb Blonde" (one of the few songs during this era that she recorded but didn't write), reached No. 24 country 1967, followed later the same year with "Something Fishy," which went to No. 17. The two songs anchored her first full-length album, Hello I'm Dolly, that same year.

In 1967, Parton was asked to join the weekly syndicated country music TV program hosted by Porter Wagoner, replacing Norma Jean. She also signed with RCA Records, Wagoner's label, during this period, where she would remain for the next two decades. Wagoner and Parton immediately began a hugely successful career as a vocal duet in addition to their solo work and their first single together, a cover of Tom Paxton's "The Last Thing on My Mind," reached the top ten on the U.S. country charts in late 1967, and was the first of over a dozen duet singles to chart for them during the next several years.

Parton is a hugely successful songwriter, having begun by writing country songs with strong elements of folk music in them based upon her upbringing in humble mountain surroundings. Her songs "Coat of Many Colors" and "Jolene" have become classics in the field, as have a number of others. As a composer, she is also regarded as one of country music's most gifted storytellers, with many of her narrative songs based on persons and events from her childhood.

In 1982 Dolly Parton sang her song "I Will Always Love You", for the movie "The Best Little Whorehouse in Texas", starring Parton and Burt Reynolds. The song - originally composed around 1974 - made few ripples, but it wasn't until Whitney Houston re-recorded it for "The Bodyguard" a decade later, that the song made yet another international hit for Dolly Parton. She later put out her own version on the 1996 album of the same name.

In 1987, Parton left her longtime label, RCA, and signed with Columbia Records, where her recording career continued to prosper, but by the mid 1990s, Parton, along with many other performers of her generation, found that her new music was not welcome on country radio playlists. She recorded a series of critically acclaimed bluegrass albums, beginning with "The Grass is Blue" (1999) and "Little Sparrow" (2001), both of which won Grammy Awards. Her 2002 album "Halos and Horns" included a bluegrass version of the Led Zeppelin classic Stairway to Heaven. In 2005, Parton released Those Were The Days, her interpretation of hits from the folk-rock era of the late 1960s through early 1970s. The CD featured such classics as John Lennon's "Imagine," Cat Stevens' "Where Do The Children Play," Tommy James' "Crimson & Clover," and the folk classic "Where Have All The Flowers Gone", as well as the title track.

In 2007, Dolly paved new musical ground by forming her own record label, Dolly Records. The label's first release - Backwoods Barbie - debuted at #2 on the Billboard country albums charts and marks Parton's first mainstream country album in 17 years. Parton is touring North America and Europe throughout 2008 in support of her latest release.

I Believe in You

An Evening With Dolly