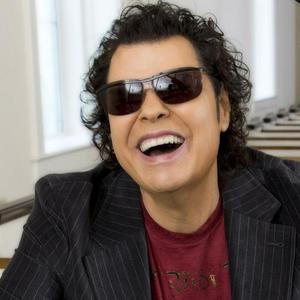 Ronnie Lee Milsap (born January 16, 1943) is an American country music singer and pianist. He was one of country music's most popular and influential performers of the 1970s and 1980s. He became country music's first well-known blind singer, and one of the most successful and versatile country "crossover" singers of his time, appealing to both country and pop music music markets with successful songs that incorporated pop, R&B, and rock and roll elements.

Milsap was born in Robbinsville, North Carolina with a congenital disorder that left him almost completely blind. He was abandoned by his mother as an infant and raised by his grandparents until the age of five, when he was sent to the Governor Morehead School for the Blind in Raleigh, North Carolina.

Milsap showed musical aptitude at an early age. The school stressed classical music training but he preferred country, gospel and rhythm-and-blues. He released his first single, Total Disaster, in 1963 at the age of twenty. This was followed by several Ashford And Simpson, compositions, including the memorable "Let's Go Get Stoned", which, unfortunately for Milsap, was relegated to a b-side. A few months later it would become a million-selling single for the more popular blind pianist, Ray Charles. 1972 found him working regularly at Roger Miller's King of the Road Club in Nashville, Tennessee and he signed with RCA Records in 1973. He was at his peak of popularity in the late 1970s and early 1980s with songs that made his name familiar to pop as well as country audiences, such as "It Was Almost Like A Song," "{There's) No Gettin' Over Me," "Smoky Mountain Rain," "I Wouldn't Have Missed It For The World," and a remake of Chuck Jackson's "Any Day Now" (which was named Billboard magazine's Number One Adult Contemporary hit of 1982). Milsap recorded for RCA until 1992. During that time he created five gold albums, one platinum album and one double platinum album. He also won six Grammy Awards and eight Country Music Association awards including the coveted Entertainer of the Year Award. In 2005 Milsap resigned with RCA Records and released a new country single, "Local Girls."

Ronnie and his wife Joyce currently make their home in Nashville, Tennessee.

Milsap enjoys his hobby of amateur (Ham) radio. More info on him can be found at: http://www.qrz.com/wb4kcg

A Better Word For Love

The Best Of Ronnie Milsap

Then Sings My Soul CD1

Then Sings My Soul CD2