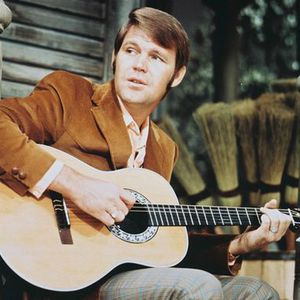 Glen Campbell (April 22, 1936 in Delight, Arkansas) is an American pop-country singer and guitarist, best known for a series of hits in the 1960s and 1970s, as well as for hosting a television variety show. Much like George Benson in the jazz world, Campbell's emerging vocal abilities eventually overshadowed his much-admired musical skills as a guitarist and changed the expected course of his career.

Before starting a solo career in 1962, Campbell was known as an accomplished guitarist with a finely tuned musicality and was in great demand as a session musician in the 1960s, playing on records by artists such as Bobby Darin, Ricky Nelson, Merle Haggard, The Monkees, Elvis Presley, Frank Sinatra, Dean Martin, The Association, and The Mamas & the Papas.

He was a full-fledged member of The Beach Boys, filling in for an ailing Brian Wilson on tour in 1964 and 1965 and playing on the Pet Sounds album.

Campbell's accolades as a musician and singer are as impressive as his talent. He made history by winning a Grammy in both country and pop categories in 1967: Gentle On My Mind snatched the country honors, and By The Time I Get To Phoenix won in pop. He owns trophies for Male Vocalist of the Year from both the CMA and the ACM, and took the CMA's top honor as Entertainer of the Year.

During his 40 years in show business, Campbell has released over 70 albums, sold 45 million records, and racked up 12 RIAA Gold albums, 4 Platinum albums, and 1 Double-Platinum album. Of his 75 trips up the charts, 27 landed in the Top 10.

In 2005, Campbell was inducted into the Country Music Hall of Fame. He is reportedly working on a new CD with Jimmy Webb scheduled for release in late 2006. In 2008 he released Meet Glen Campbell on Capitol Records, in which he covered songs from such artists as the Foo Fighters, John Lennon, Tom Petty, and The Velvet Underground.

On August 29, 2011 Glen Campbell released his final studio album titled "Ghost On The Canvas" on Surfdog Records, an album reflecting Glen Campbell's life from his Arkansas origins to Hollywood fame, dominating the pop charts. An extensive Goodbye Tour is planned to support his farewell release.

Sings For The King