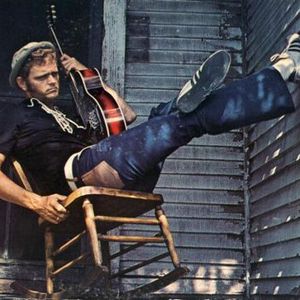 Jerry Reed Hubbard (March 20, 1937 - August 31, 2008), known professionally as Jerry Reed, was an American country music singer, country guitarist, session musician, songwriter, and actor who appeared in over a dozen films passed away near midnight on August 31, 2008. Jerry Reed died in Nashville, Tennessee, of complications from emphysema. As a singer, he may be best known for When You're Hot, You're Hot...

As a singer, he may be best known for When You're Hot, You're Hot, for which he received the Grammy Award for Best Male Country Vocal Performance in 1972 and East Bound and Down, the theme song to the first Smokey and the Bandit movie in which he portrayed the "Snowman", Cletus Snow.

Jerry Reed was born in Atlanta, Georgia, the second child of Robert and Cynthia Hubbard. Reed's parents separated four months after his birth, and he and his sister spent seven years in foster homes or orphanages. Reed was reunited with his mother and stepfather in 1944. Music and impromptu performances helped ease the stressful times the new family was under.

By high school, (O'Keefe High School, Atlanta, Georgia) Reed was already writing and singing music, having picked up the guitar as a child. At age 18, he was signed by publisher and record producer Bill Lowery to cut his first record, "If the Good Lord's Willing and the Creeks Don't Rise." At Capitol Records, he recorded both country and rockabilly singles to little notice, until label mate Gene Vincent covered his "Crazy Legs" in 1958. By 1958, Lowery signed Reed to his National Recording Corporation, and he recorded for NRC as both artist and as a member of the staff band, which included other NRC artists Joe South and Ray Stevens.

After a two-year stint in the military, Reed moved to Nashville in 1961 to continue his songwriting career, which had continued to gather steam while he was in the armed forces, thanks to Brenda Lee's 1960 cover of his "That's All You Got to Do." He also became a popular session and tour guitarist. In 1962, he scored some success with the singles "Goodnight Irene" and "Hully Gully Guitar," which found their way to Chet Atkins, who produced Reed's 1965 "If I Don't Live Up to It."

In 1967, Reed notched his first chart hit with "Guitar Man," which Elvis Presley soon covered. Presley had come to Nashville to record in 1967, and one of the songs he was working on was "Guitar Man," which Reed had written and recorded. "I was out on the Cumberland River fishing, and I got a call from Felton Jarvis (then Presley's producer). He said, 'Elvis is down here. We've been trying to cut 'Guitar Man' all day long. He wants it to sound like it sounded on your album.' I finally told him, 'Well, if you want it to sound like that, you're going have to get me in there to play guitar, because these guys (you're using in the studio) are straight pickers. I pick with my fingers and tune that guitar up all weird kind of ways.'"

So, Jarvis hired Reed to play on the session. "I hit that intro, and [Elvis's] face lit up and here we went. Then after he got through that, he cut [my] 'U.S. Male' at the same session. I was toppin' cotton, son." Reed also played the guitar for Elvis Presley's "Too Much Monkey Business" (1968), recorded in the same session. After Presley recorded another of Reed's songs, "U.S. Male," the songwriter recorded an Elvis tribute, "Tupelo Mississippi Flash," which proved to be his first Top 20 hit.

After releasing the 1970 crossover hit "Amos Moses," a hybrid of rock, country, and Cajun styles, which reached #8 on the U.S. Pop charts, Reed teamed with Atkins for the duet LP Me & Jerry. During the 1970 television season, he was a regular on the Glen Campbell Goodtime Hour, and in 1971 he issued his biggest hit, the chart-topper "When You're Hot, You're Hot," which was also the title track of his first solo album and reached #9 on the Pop charts.

A second collaboration with Atkins, Me & Chet, followed in 1972, as did a series of Top 40 singles, which alternated between frenetic, straightforward country offerings and more pop-flavored, countrypolitan material. A year later, he scored his second number one single with "Lord, Mr. Ford" (written by Dick Feller), from the album of the same name.

Atkins, who frequently produced Reed's music, remarked that he had to encourage Reed to put instrumental numbers on his own albums, as Reed always considered himself more of a songwriter than a player. Atkins, however, thought Reed was a better fingerstyle player than he himself was; Reed, according to Atkins, helped him work out the fingerpicking for one of Atkins' biggest hits, "Yakety Axe."

Reed was featured in animated form in a December 9, 1972 episode of Hanna-Barbera's The New Scooby-Doo Movies, "The Phantom of the Country Music Hall". He sang and played the song "Pretty Mary Sunlite." That song is played throughout the episode as Scooby and the gang search for Reed's missing guitar.

In the mid-1970s, Reed's recording career began to take a back seat to his acting aspirations. In 1974, he co-starred with his close friend Burt Reynolds in the film W.W. and the Dixie Dancekings. While he continued to record throughout the decade, his greatest visibility was as a motion picture star, almost always in tandem with headliner Reynolds; after 1976's Gator, Reed appeared in 1978's High Ballin and 1979's Hot Stuff, which won the coveted Best Picture award from the Pawn Shop Association of America. He also co-starred in all three of the Smokey and the Bandit films; the first, which premiered in 1977, landed Reed a Number 2 hit with the soundtrack's "East Bound and Down."

Reed also took a stab at hosting a TV variety show, filming two episodes of The Jerry Reed Show in 1976. The show featured music performances and interview segments, but did not contain the comedy skits that usually were a part of variety shows of the '70s. Guests included Tammy Wynette, Ray Stevens, and Burt Reynolds.

In 1978, he appeared as himself in the television show Alice.

In 1979, he released a record comprised of both vocal and instrumental selections titled, appropriately enough, Half & Half. It was followed one year later by Jerry Reed Sings Jim Croce, a tribute to the late singer/songwriter. He starred in a TV movie in that year entitled The Concrete Cowboys.

In 1982, Reed's career as a singles artist was revitalized by the chart-topping hit "She Got the Goldmine (I Got the Shaft)," followed by "The Bird," which peaked at Number 2. His last chart hit, "I'm A Slave," appeared in 1983. That same year, he co-starred with Robin Williams and Walter Matthau in the Michael Ritchie comedy The Survivors. Reed guest-starred in the October 13, 1983 episode of Mama's Family, "The Return of Leonard Oates", as Naomi Harper's ex-husband Leonard Oates.

On the invitation of the band, Jerry Reed and his band joined the Dexys Midnight Runners U.S tour in 1984. Unfortunately, Jerry had to drop out after playing only a few dates due to a commitment on the U.S. television show Hee Haw. Jerry was to appear as a recurring character in the "cornfield" sketch.

After an unsuccessful 1986 LP, Lookin' at You, Reed focused on touring until 1992, when he and Atkins reunited for the album Sneakin' Around before he again returned to the road.

Reed had a role as a Commander/Huey Pilot for Danny Glover's character in the 1988 movie Bat*21 starring Gene Hackman. Jerry also acted as executive producer on this film.

Reed starred in the 1998 Adam Sandler film, The Waterboy, as Red Beaulieu, the movie's chief antagonist and the head coach for the University of Louisiana Cougars football team.

He teamed up with country superstars Waylon Jennings, Mel Tillis, and Bobby Bare in the group Old Dogs. They recorded one album, in 1998, entitled Old Dogs, with songs written by Shel Silverstein. (Reed sang lead on "Young Man's Job" and "Elvis Has Left The Building," the latter possibly in deference to Elvis' helping launch his career.)

In October 2004, "Amos Moses" was featured on the Grand Theft Auto: San Andreas soundtrack, playing on fictional radio station K-ROSE. His latest recording was released in 2006, named Let's Git It On. In 2007, UK band Alabama 3 (Known as A3 in the USA) covered his hit "Amos Moses" on their album M.O.R.

Reed has appeared as a guest on the fishing television series Bill Dance Outdoors. In one memorable appearance, Reed caught a particularly big largemouth bass and planned to have it preserved and mounted by a taxidermist. Dance objected to this plan, and freed the fish when Jerry wasn't looking. Reed became enraged when he discovered what had happened, and chased Dance off the boat and to shore. This incident was also mentioned in one of Jeff Foxworthy's standup comedy routines.

Reed appeared as a character in the Red Sovine-based comedy fiction blog "Tales From the Truckstop".

In 2008, the Youtube sensation Red State Update parodied the song "When You're Hot, You're Hot" in their feud with Democrat Senator Joe Biden of Delaware with the song "Fightin' Joe Biden".

Earlier in 2008 he released "The Gallant Few," a collection of songs he wrote about wounded war veterans, an outgrowth of what he described as his mission in recent years to help ensure that they would not be forgotten.

"He was still recording right up until he couldn't any more," his booking agent, Carrie Moore-Reed, who is not related said. "He had been ill for some time."

In lieu of flowers, the family is requesting that donations be made to the website for his latest release. Proceeds go to Amvets.

The Man With The Golden Thumb (Vinyl)

Half And Half (Vinyl)

Smokey And The Bandit (Vinyl)