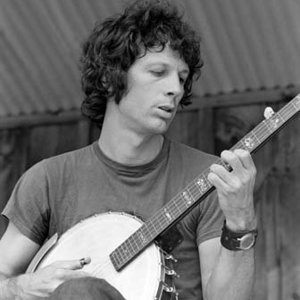 John Cowan Hartford (December 30, 1937? June 4, 2001) was an American country and bluegrass composer and musician known for his mastery of the fiddle and banjo, as well as for his witty lyrics, unique vocal style, and extensive knowledge of Mississippi River lore. Hartford performed with a variety of ensembles throughout his career, and is perhaps best known for his solo performances where he would interchange the guitar, banjo, and fiddle from song to song. He also invented his own shuffle tap dance move, and clogged on an amplified piece of plywood while he played and sang.

At the time of his death, Hartford was also working on the biography of the blind fiddler Ed Haley. Hartford's album Wild Hog in the Red Bush is a collection of Haley's tunes. Hartford also provided narration for several of Ken Burns' documentaries.
Hartford was given a star on the St. Louis Walk of Fame.
Hartford recorded more than 30 albums in his life, ranging across a broad spectrum of styles--from the traditional country of his early RCA recordings, to the new and experimental sound of his early newgrass recordings, to the traditional folk style to which he often returned later in his life. Hartford's albums also vary widely in formality, from the stately and orderly "Annual Waltz" to the rougher and less cut recordings that typified many of his later albums.
"Aereo-Plain" and "Morning Bugle" are often considered to be Hartford's most influential work, coming as they did at the very beginning of a period in which artists such as Hartford and the New Grass Revival, led by Sam Bush, would create a new form of country music, blending their country backgrounds with influences from another of other sources. His later years saw a number of live albums, as well as recordings that explored the repertoire of old-time folk music. He sketched the cover art for some of his mid-career albums, drawing with both hands simultaneously.
From the 1980s onwards, Hartford struggled with non-Hodgkin's Lymphoma. On June 4, 2001 at Centennial Medical Center in Nashville, at age 63, he died of the disease.
Hartford is remembered as an influential and pioneering artist. Never bound by the limitations of one genre, he recorded wherever his interests led him. Performing and recording until his illness rendered him incapable of continuing, Hartford contributed a vast and unique body of work to the library of American music.

Natural To Be Gone

Wild Hog In The Red Brush

Nobody Knows What You Do

Down On The River