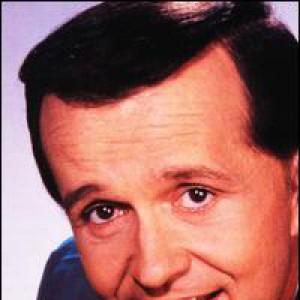 James William (Bill) Anderson III (born November 1, 1937 in Columbia, South Carolina) is an American country music singer and songwriter, who is also a two-time game show host, most notably for his role as the host of Fandango on TNN. One of the most successful songwriters in country music history, Bill Anderson was also a hugely popular singer in his own right, earning the nickname "Whispering Bill" for his gentle, airy vocal style and occasional spoken narrations. Biography & career Rise to fame

One of the most successful songwriters in country music history, Bill Anderson was also a hugely popular singer in his own right, earning the nickname "Whispering Bill" for his gentle, airy vocal style and occasional spoken narrations.
Biography & career

[edit] Rise to fame
Although Bill was born in Columbia, South Carolina, he was raised in Atlanta, Georgia. He studied journalism at the University of Georgia, with an eye toward sports writing, and worked his way through school as a radio DJ, during which time he first tried his hand at songwriting and singing. [2] He attended the University of Georgia and earned a degree in journalism from the university's Henry W. Grady College of Journalism and Mass Communication. Eventually, he landed a job at the Atlanta Constitution.

His composition "City Lights," written when he was just 19 years old, while working in Commerce, Georgia at WJJC Radio 1270 AM, was recorded by Ray Price in 1958 and went all the way to the top of the country charts. Anderson took full advantage of his big break, moving to Nashville and landing a record contract of his own with Decca. [3]


[edit] 1959 ? 1978: Career as a Country music singer
Before signing to Decca, Anderson recorded for the small TNT label between 1957 and 1959, where he released three singles that failed to chart the Country charts at the time, including a version of "City Lights". After signing with Decca in 1959, he then left TNT.

His first chart hit came with 1959's "That's What It's Like to Be Lonesome," and he had his first Top Ten entry with 1960's "Tip of My Fingers." Early hits like "Po' Folks" (1961), "Mama Sang a Song" (his first number one, from 1962), and "8 X 10" (number two, 1963) still remain among his best-known. Anderson recorded his biggest hit and signature song, the partly spoken ballad "Still," in 1963, and it not only topped the country charts, but crossed over to the pop Top Ten as well. [4] "Still" remains Anderson's biggest hit. The song climbed to No. 8 on the Pop charts, as well as reaching No. 3 on the Adult Contemporary charts. The song made Anderson briefly a star in both Country and Pop music.

Anderson remained quite successful throughout the 60s, scoring a number of No. 1s and Top 10s during that period of time.

His final Top Ten country hit came with 1978's disco-tinged "I Can't Wait Any Longer," and by 1982, Anderson's inability to score a follow-up hit led him away from both songwriting and recording. [6]

Besides his "whisper" of a singing voice, he was also known for his whispering recitations during songs, such as in "Mama Sang A Song" and "Still." In songs such as "Double S," he whispered through the whole single, telling about his fictitious one night stand with a woman who wouldn't give her name, but mysteriously called herself "Double S."


[edit] Songwriting career
Bill Anderson has written songs for many Country music singers, since first writing for Ray Price, among others in the late 1950s. Songwrting was the first career Anderson established before entering Country music as a singer. Anderson wrote many of Country singer, Connie Smith's biggest hits in the 1960s, including her best-known song, "Once a Day", which topped off at No. 1 in 1964 and spent 8 weeks at the No. 1 spot, the longest by any female Country music singer. He was also wrote Smith's "Cincinnati, Ohio" in 1967, among others.

In 1995, Billboard magazine named four Bill Anderson compositions ? ?City Lights,? ?Once A Day,? ?Still,? and ?Mama Sang A Song? ? among the Top 20 Country Songs of the past 35-years. No other songwriter had as many songs listed. [8]

Anderson ended the 1990s with a pair of #1 hits, ?Wish You Were Here,? by Mark Wills and the Grammy nominated ?Two Teardrops? by Steve Wariner. His song, ?Too Country,? recorded by Brad Paisley along with Anderson, Buck Owens and George Jones, won CMA Vocal Event Of The Year honors for 2001. The following year saw Kenny Chesney soar with his version of the Anderson-Dean Dillon masterpiece, ?A Lot Of Things Different.? [9]


[edit] Acting and game show career
Bill Anderson was the first country artist to host a network game show, starring on ABC-TV's, The Better Sex. He also appeared for three years on ABC's Daytime soap opera, One Life To Live. [10]

For six years he hosted an interview show called Opry Backstage, and found time to be co-producer of another TNN Show called, You Can Be A Star. In addition, Bill has appeared frequently as a guest star on television's top variety and game shows, including The Tonight Show, The Today Show, Match Game, Family Feud, Password Plus (with substitute game show host, Bill Cullen), Hee Haw and others. He currently hosts Bill Anderson Visits With The Legends on XM satellite radio. [11]

He has also served as a television game show host, emceeing Fandango, which aired on The Nashville Network for seven consecutive seasons, in addition to co-hosting The Better Sex with Sarah Purcell. He also co-produced the The Nashville Network show, You Can Be a Star!, which was hosted by fellow country singer Jim Ed Brown. Anderson also occasionally appeared on the ABC soap opera One Life to Live. He was also a frequent guest on Match Game in the '70s.


[edit] 1990 ? present: Career today
Bill Anderson's autobiography, ?Whisperin' Bill,? was published by Longstreet Press in 1989 and relates the fascinating details of his life and lengthy career in show business. The book, which Bill personally wrote over a period of three years, made bestseller lists all across the south. Bill's second book, a humorous look at the music business titled, ?I Hope You're Living As High On The Hog As The Pig You Turned Out To Be,? was published in 1993 and is currently in it's fourth printing. [12]

He has been a member of the Grand Ole Opry since 1961 and performs there regularly. In 2000, his latest album, A Lot Of Things Different, received rave reviews. Each song on the album was written, or co-written, by Anderson. His 1998 release, Fine Wine, was produced by Steve Wariner and released on Warner Brothers' Reprise/Nashville label. Bill Anderson's Greatest Hits Volume I & II have been released on Varese-Sarabande Records along with The Best Of Bill Anderson on Curb. [13]

On February 15, 1965, Bill appeared--along with two ?imposters?--on the game show, To Tell The Truth, challenging the panel to determine ?the real Bill Anderson.? According to the affidavit read at the beginning of his segment, Bill was at the time ?generally considered to be the top composer of country music in the nation.? Only two of the four panelists successfully identified Bill. At the end of the segment, he sang one of his own compositions, ?Poor Folks.? (During questioning, Bill?the real Bill?got a big laugh when Kitty Carlisle asked, ?Why are you wearing this costume?? After looking down at his brightly decorated suit--featuring sequined snowflakes--Bill deadpanned, ?Well, it's all I had.?)

In 2004 Brad Paisley and Alison Krauss scored a hit with Bill and Jon Randall's, "Whiskey Lullaby." In November 2002, BMI named Bill its first country songwriting Icon, placing him alongside R&B legends Little Richard, Chuck Berry, Bo Diddley, and James Brown as the only recipients of that award. His compositions can be heard on recent or forthcoming releases by Vince Gill, Lorrie Morgan, John Michael Montgomery, Sara Evans, Tracy Byrd, and others. [14]

I Saw The Light

A Place In The Country