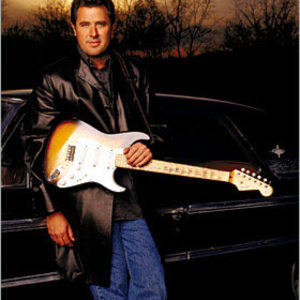 Vince Gill (born April 12, 1957) is an American country music musician, songwriter, singer and a member of the Country Music Hall Of Fame. He achieved commercial success and fame both as frontman to the country-rock band Pure Prairie League in the 1970s, and as a solo artist beginning in 1983, where his talents as a vocalist and musician have placed him in high demand as a guest vocalist, and a duet partner (with artists including Dolly Parton, Reba McEntire, Amy Grant and Barbra Streisand).

Gill was born in Norman, Oklahoma, the home of the University of Oklahoma Sooners and learned to play several instruments, including banjo and guitar before he started high school at Oklahoma City's Northwest Classen High School. After he graduated, he played in a number of bluegrass bands. He debuted on the national scene with the country-rock band Pure Prairie League in 1979, appearing on that band's album Can't Hold Back. Gill is the lead singer on their hit song, "Let Me Love You Tonight" (1980), which he was still performing in concert years later - thus, he said, confusing many fans who knew him only from his subsequent solo work. Gill appeared on two subsequent albums along with his then-wife Janis Oliver.

Departing Pure Prairie League in 1981, Gill joined Rodney Crowell's backing band The Notorious Cherry Bombs, where he met and worked with Tony Brown and Emory Gordy Jr., both of whom would later produce many of his future solo albums.

Signing as a solo artist with RCA Records in 1983, he first charted while on that label. In 1989 he switched to MCA Records where he recorded his breakthrough hit "When I Call Your Name." His 1998 album The Key received great critical acclaim. His other albums include Next Big Thing (2003) and Let's Make Sure We Kiss Goodbye (2000). The Guitar Slinger Songfacts says that Gill released his twelfth studio album, Guitar Slinger, on October 25, 2011 via MCA Nashville. It was his manager, Larry Fitzgerald, who came up with the title, as he felt there was something different the way Gill was playing the guitar on the record.

Gill hosted the CMA Awards every year from 1992 to 2003. In 2004 he received a Grammy Award for Best Male Country Vocal Performance. In 1997, he was inducted into the Western Performers Hall of Fame at the National Cowboy & Western Heritage Museum in Oklahoma City, Oklahoma.

He married country singer Janis Oliver (of Sweethearts Of The Rodeo fame) in 1980. The couple have one daughter, Jennifer Jerene Gill, born 5 May 1982. Vince and Janis separated in the mid-1990s and eventually divorced in June 1998. Vince later began dating and eventually married Christian/pop singer Amy Grant in March of 2000. They have one daughter, Corrina Grant Gill born 12 March 2001.

Dire Straits leader Mark Knopfler was a fan of Gill's, and had asked Gill to join the band full time. Gill turned down the invitation but did sing backup on one song ("The Bug") from Dire Straits' album On Every Street.

Gill has also sung duets with numerous artists, including Dolly Parton ("I Will Always Love You"), Reba McEntire ("Oklahoma Swing," "The Heart Won't Lie," "It Just Has to Be That Way"), Amy Grant ("House of Love"), and Barbra Streisand ("If You Ever Leave Me"); his other credits as a backup vocalist have included "Girls With Guitars" by Wynonna Judd (written by Mary-Chapin Carpenter, who, coincidentally, had a country hit with her cover of "The Bug") and "Nothing Left Behind Us" by Richard Marx.

Down To My Last Bad Habit

These Days: The Reason Why

These Days: Workin' On A Big Chill