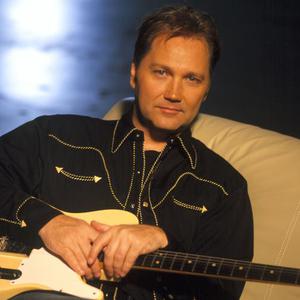 Steve Wariner (born Steven Noel Wariner, December 25, 1954, Noblesville, Indiana) is an American country music singer, guitarist and songwriter. He was one of the most popular artists during the 1980s, thanks to a string of No. 1 singles recorded for both RCA and MCA Records. After his popularity waned somewhat during the mid-1990s, he enjoyed a resurgence thanks to his 1998 hit "Holes in the Floor of Heaven." Career

[edit] Career
Wariner began performing as a youth in his father's band and in local clubs. In 1971, he was hired as a bassist for Dottie West's band. He also worked heavily with Chet Atkins (one of his childhood influences) and he played with Bob Luman's band.

His first major recording contract was with RCA Records in 1978. His first single releases failed to chart in the top 40 of Billboard magazine's Hot Country Singles chart, although the song "I'm Already Taken" was re-released in 1999, peaking at #3 that year. His first No. 1 hit came in December, 1981, with "All Roads Lead to You."

In the early 1990s, Wariner continued his success with Arista Records, with several of his songs reaching the top 10. But his success soon tapered off, as radio programmers became more interested in newer performers.

Wariner, however, continued to maintain his popularity through his instrumental talents. One example was 1991's "Restless," a collaboration with Ricky Skaggs, Vince Gill and Mark O'Connor (from O'Connor's album The New Nashville Cats). "Restless" won Wariner (as well as Skaggs and Gill) his first Grammy Award in 1991 for Best Country Vocal Collaboration. In 1996, Wariner released an album of all instrumental tracks called No More Mr. Nice Guy. Though well-received by critics, it proved to be Wariner's last album for Arista.

Wariner also remained in the public eye with his songwriting talents. His composition, "Longneck Bottle" (a No. 1 hit by Garth Brooks), along with a No. 1 duet from early 1998 with singer Anita Cochran called "What If I Said" (his first No. 1 in more than eight years) reinvigorated Wariner's career.

The highlight of Wariner's career came in the spring of 1998. Now recording for Capitol Records, his song "Holes in the Floor of Heaven" - a song about dealing with grief of close friends and relatives - promptly shot to No. 2 and won the Country Music Association awards for Single of the Year and Song of the Year.

Wariner also collaborated with other well-known singers and songwriters, including Clint Black and Bill Anderson; he also scored several more hits, most notably 1999's "Two Teardrops" and "I'm Already Taken" (the latter a re-recording of his 1978 debut release).

All Over The Map

It Ain't All Bad

My Tribute To Chet Atkins