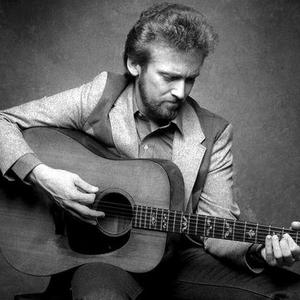 "Jackie Keith Whitley" (b. July 1, 1954 in Sandy Hook, Kentucky d. May 9, 1989) was an American country music singer. Early life Whitley learned to play a guitar at a very young age, and became involved with a regional television show when he was eight years old. He and his friend, Ricky Skaggs, formed a bluegrass band, which landed both of them their first break in 1970, when they joined Ralph Stanley's Clinch Mountain Boys. Whitley was singing lead for the band by 1974 at the age of 20.

Whitley learned to play a guitar at a very young age, and became involved with a regional television show when he was eight years old. He and his friend, Ricky Skaggs, formed a bluegrass band, which landed both of them their first break in 1970, when they joined Ralph Stanley's Clinch Mountain Boys. Whitley was singing lead for the band by 1974 at the age of 20.

In 1978, he joined J. D. Crowe and the New South as lead vocalist and guitarist. Critics were by then praising his vocals, and these reviews eventually caught the attention of RCA Records, who would sign him to a contract in 1984.

Whitley's first solo album, ''A Hard Act to Follow,'' was released in 1984. However, the songs off of the album didn't get much airplay. Critics regarded the album as too erratic; while Whitley was working hard to achieve his own style, the songs he produced were inconsistent, and because of this, the follow up album would be more with pop sounds and a new producer as well who had been in the music buisness for sometime and had several hit records under his belt with other artists Blake Mevis.

L.A. to Miami, released in 1986. This album would give him his first Top 20 country hit single, "Miami, My Amy." The song was followed by three more hit songs, "Ten Feet Away," "Homecoming '63," and "Hard Livin." The album also had included "On The Other Hand" and "Nobody In His Right Mind Would've Left Her." Both George Strait and Randy Travis waited to see if Whitley would release these two songs as singles; when he didn't, Strait grabbed "Nobody in his Right Mind Would've Left Her", and Travis did the same with "On the Other Hand." Both Strait and Travis scored big on both songs, landing both at number one on the country charts.

During his tour to promote ''L.A. to Miami'', he met and started dating Lorrie Morgan, a fellow country singer. The pair were married in November, 1986, and they had their only son, Jesse Keith Whitley, in 1987. Keith also adopted Lorrie's daughter Morgan from her first marriage.

During the new recording sessions in 1987, Whitley started feeling that the songs he was doing were not up to the way he wanted them,nal studio album, ''I Wonder Do You Think of Me''. The album was released three months after his death, on August 1, 1989. The album produced two more #1 hits, with the title track and "It Ain't Nothin'." "I'm Over You" also saw the top ten in the spring of 1990, reaching No. 3.

In 1990, a collection of Keith's greatest hits was released. It has gone on to sell more than three million copies over the years for RCA.

On the greatest hits collection was a demo record that Whitley made in 1987, called "Tell Lorrie I Love Her," and also a new song to which Lorrie Morgan added her vocals to and created a duet called "Til A Tear Becomes A Rose". The song rose to No. 13 and won them 1991's CMA award for Best Vocal Collaboration.

RCA also released a compilation of old performance clips (from his days in the Clinch Mountain Boys and the New South), interviews, and some previously unreleased material under the title "Kentucky Bluebird", a moniker that became Whitley's nickname. The CD has become a huge collector's item among fans over the years due to it being out of print.and is currently in production.

Almost twenty years after Keith's passing fans and fellow singers still wonder what would have happened if Keith had lived, some say Garth Brooks would have taken a back seat to Keith in the 1990's , Tim McGraw and many singers today still are influenced by the man who just wanted to be remembered.

In 2007, long time fan Kindall Wann will be launching an all Keith Whitley radio station on the internet site Live365.com, the station will contain every known public release of Keith's and also the live concerts, demos, and more that fans have has among them for years.

In the summer of 2007, Austin City Limits will be releasing like in past years, several DVDs of their concerts over the years, and Keith's "FULL" concert is one that will be released. The concert filmed is an hour long, but the television version is only 30 minutes long.

Keith's music video's and many rare performances have recently been showing up on the website YouTube.com, one of the performances is from Hee Haw in 1985, Keith singing "Miami, My Amy".

Wherever You Are Tonight

I Wonder Do You Think Of Me