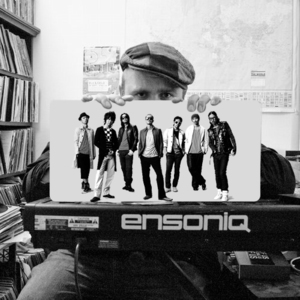 #1 The Japanese pop group EXILE was formed in 1999 under the name J Soul Brothers, which changed its name to EXILE in 2001. Its member roster currently includes HIRO (originally a member of Zoo, MAKIDAI, MATSU, USA as performers, and ATSUSHI as a vocalist. Shun was a member of the group until March 29th, 2006, when he announced that he was leaving the group to pursue a solo career. As of September 2006, the band has got a new co-vocalist, TAKAHIRO. A new member, AKIRA, has also joined as a performer, making EXILE into a seven-men group. In April 2009, J Soul Brothers (KENCHI, KEIJI, TETSUYA, NAOTO, NAOKI, NESMITH, SHOKICHI) merged with EXILE to become a 14 member group.
Their official site can be found here.

#2 #2 The American hip-hop producer, DJ and occassional MC, Exile (real name Aleksander Manfredi), began his career as a member of hip-hop duo Emanon along with Aloe Blacc. He has released several solo beat albums, most notably Dirty Science (2006) and Radio (2009). He is best known for the album Below the Heavens (2007) by Blu & Exile. He also produced Fashawn's album Boy Meets World (2009) and has released another Blu & Exile album, Give Me Flowers While I Can Smell Them (2011). On top of this, he has been a guest producer for several notable acts, such as Ghostface Killah, Jurassic 5, Mobb Deep and Kardinall Offishall.

#3 The American country rock group Exile formed in 1963 by singer/guitarist J.P. Pennington as the Exiles. They produced a number of minor hits, as well as the #1 charting pop hit Kiss You All Over. After a few years, Stokely left the group and was replaced by Les Taylor, who helped reshape the group into its present country rock form. While they did find some new success in this form, they eventually disbanded in 1993. By 1996, Pennington and Taylor reformed the band with a new lineup; it includes guitarists/singers Pennington and Taylor, bassist/vocalist Sonny LeMaire, keyboard player Marlon Hargis and drummer Steve Goetzman.

#4 The Bulgarian black metal band EXILE was formed in spring 2004 by Erilyne (vocals & guitars) in Sandanski, Bulgaria. Exile starts as one-man project. The first records - "The Nightcoming 1" was maded at the same time by Erilyne. Musically this first demo is focused on old-school black metal with some epic elements. To continue Exile's activities as a project and for some steps forward, Erilyne decide to invite other musicians. After two months Vassil (guitars) joined Exile as a guitarist and Leidolf (drums) as a drummer. The Nightcoming 1" was released as a part of the split CD EXILE vs. BOLG (Acclaim Records). In summer 2004 was recorded the second demo - "Restless Soul" - most raw than "The Nightcoming 1". Talmor joined Exile as a bassist in 2005 and leaved the band in the beginning of 2006. "The Nightcoming 2" was succeed recorded in may 2005. This album was recorded and composed for one week. In this album Exile focused mainly on the aggression, the clean and powerful sound. For a first time without any keys, this album is the most real face of Exile.

#5 Exile is a black metal band from Turkey and it is a side project of Moribund Oblivion.The band released a demo(2004) and an album(2007):"Exile is Eternal"(both with the same name)

#6 Tim Exile is the recording alias of Tim Shaw, a producer and performer of electronic music spanning drum and bass, IDM, breakcore and gabber.

#7 Exile is a metal band from Cornwall, England. The band consists of Dom Cardell - Vocals; Alex Goodrich - Lead guitar; Brad Baker - Rhythm guitar; Fabian - Bass; Josh Hawke - Drums/Backup vocals. They were formed in 2009 and have just recorded their first demo. They can be found on myspace.

The Next Door -Indestructible- (CDS)