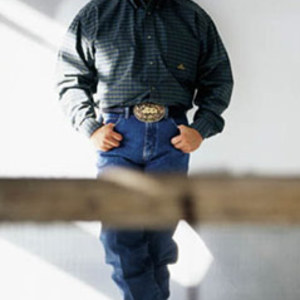 Daryle Singletary (born March 10, 1971 in Cairo, Georgia) is a country music singer. His most famous songs came from his first, self-titled, album. They were "I Let Her Lie" and the rabble-rousing anthem "Too Much Fun." Singletary grew up singing gospel alongside his cousins and brother., While attending high school enrolled in a variety of vocal classes; after graduation, he worked at a tractor dealership before relocating to Nashville, Tennessee to pursue a career in music.

In Music City, Singletary frequently shared open-mic stages and amateur showcases alongside fellow up-and-comers like Tracy Lawrence and Tim McGraw; he eventually found work as a demo singer, recording the track "Old Pair of Shoes" for an independent label. The song made its way to Randy Travis, who decided to record it himself while recommending Singletary to his management team. In short time, Singletary signed to Giant Records. The follow-up, All Because of You, appeared in late 1996 and generated the hit "Amen Kind of Love." Singletary's third album, Ain't It the Truth, was released in early 1998.

Rockin' In The Country

That's Why I Sing This Way

Ain't It The Truth

All Because Of You