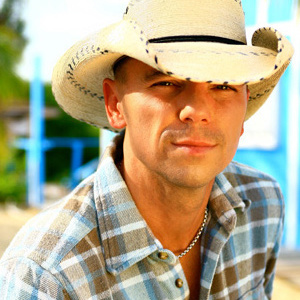 Kenneth Arnold (Kenny) Chesney (born March 26, 1968) is an American country music singer and songwriter. Chesney has recorded 15 albums, 14 of which have been certified gold or higher by the RIAA. He has also produced more than 30 Top Ten singles on the U.S. Billboard Hot Country Songs charts, 20 of which climbed to the top of the charts. Over the life of his career, Chesney has been honored with numerous awards from the Academy of Country Music (ACM), Country Music Association (CMA), American Music Awards (AMA)...

Chesney was born on March 26, 1968, in Knoxville, Tennessee at St. Mary's Medical Center and raised in Luttrell, Tennessee, better known as the home of Chet Atkins. In 1989 Chesney recorded a self-released demo album at Classic Recording Studio in Bristol, Virginia. He sold 1,000 copies while performing at the local clubs in Johnson City and used the money from album sales to help buy a new guitar. Chesney graduated from East Tennessee State University in December 1990, with a degree in advertising. After graduation he headed to Nashville and performed at several local clubs. He became the resident performer at The Turf, a honky tonk bar in the city's historic district.

In 1992, the head of publisher/writer relations at BMI, Clay Bradley, recommended Chesney to his friend at Opryland Music Group, Troy Tomlinson, by saying: "I met this kid today from East Tennessee. He's a good singer, a good songwriter, and more than anything, I think you're going to really like him as a person.? For the audition for Tomlinson, Chesney performed five songs. Tomlinson's reaction was enthusiastic, later telling HitQuarters: "First of all I was attracted to the songs, because I thought that he painted great pictures in his lyrics, particularly for someone who had not been around the typical Music Row co-writes. I thought that he sang very well too. But more than anything there was a kind of this ?I-will-do-it' look in his eyes - I was really drawn in by the fact that he was so set on being successful in this business."

Chesney left the audition with a songwriter's contract. An appearance at a songwriter's showcase the following year led to a contract with Capricorn Records which had recently started a country division. He released his debut album In My Wildest Dreams in April 1994. The album's lead-off singles, The Tin Man and Whatever It Takes, both reached the lower regions of the Billboard Hot Country Singles & Tracks charts. The album sold approximately 10,000 copies before Capricorn Records closed its country music division later that year.

After Capricorn's closure, Chesney signed with BNA Records, which released his album All I Need To Know in 1995. The album produced three hit singles. Fall In Love and All I Need To Know both reached the Top Ten, while Grandpa Told Me So peaked at #23. The Tin Man was also included on this album, although it was not released as a single at the time.

Chesney's second major-label album was Me And You, which was released in 1996. Although its lead-off single peaked just outside the Top 40 on the country charts, the album's title track (which was reprised from All I Need To Know) and the single When I Close My Eyes (which was previously recorded by Larry Stewart on his 1993 debut album Down the Road) both peaked at #2 on the Billboard country charts. Me And You was also Chesney's first gold-certified album. A cover of Mac McAnally's 1990 single Back Where I Come From was also included on this album. Although Chesney's version was never released as a single, it has become a regular song played during his concerts. In recognition of his successful year, Chesney was honored with the 1997 Academy of Country Music's New Male Vocalist of the Year award.

I Will Stand, Chesney's third album for BNA, was released in 1997. She's Got It All was the album's lead-off single, becoming Chesney's first #1 single, spending three weeks at the top of the Billboard country charts. The album's second single, A Chance, peaked just shy of the Top Ten. In 1998, That's Why I'm Here went to #2 on Billboard and reached the top of the charts on Radio & Records, giving Chesney his third #1 single overall.

Everywhere We Go, released in 1999, was Chesney's fourth album for BNA. The album produced two consecutive #1 singles in How Forever Feels and You Had Me From Hello (the latter inspired by a line in the movie Jerry Maguire). The album also produced two more hits, including She Thinks My Tractor's Sexy and What I Need To Do, which peaked at #11 and #8 on the country charts, respectively. Everywhere We Go was Chesney's first platinum-selling album.

By 2000, Chesney released his Greatest Hits compilation album. It included four new tracks, as well as updated versions of Fall In Love, The Tin Man, and Back Where I Come From. The new version of The Tin Man was one of the disc's three singles, along with two of the new tracks, I Lost It and Don't Happen Twice.

In 2003, Chesney recorded All I Want For Christmas Is A Real Good Tan. The album's title track peaked at #30 on the country charts from holiday airplay.

2004 saw the release of Chesney's album When The Sun Goes Down. Its lead-off single, There Goes My Life, spent seven weeks at the top of the Billboard country charts. On April 21, 2004, the accompanying video was honored by CMT with the Male Video of the Year award. The album's title track, When The Sun Goes Down, a duet with Uncle Kracker, was also a #1 single. The video from the third single from the album, I Go Back, was honored on April 11, 2005, with the Male Video of the Year by Country Music Television.

Chesney released his second album of the year in November, The Road and the Radio, producing three #1 singles. Living In Fast Forward, Summertime, and Beer In Mexico all hit #1, while Who You'd Be Today and You Save Me broke the Top Five.

Live: Live Those Songs Again is Chesney's first live album. Released on September 19, 2006 on BNA Records, the album includes live renditions of 15 songs, including 11 singles. Later in 2006, Chesney, along with Tim McGraw, contributed to a version of Tracy Lawrence's single Find Out Who Your Friends Are, which can be found on Lawrence's album For The Love. The song became Lawrence's first #1 single in 11 years, as well as the second-slowest climbing #1 single in the history of the Billboard music charts.

On November 7, 2007 Chesney was named the CMA Entertainer of the Year for the third time in four years.

On September 11, 2007, Chesney released the album Just Who I Am: Poets & Pirates. The album represented a move to a more gulf and western sound with a number of "breezy, steel-drum island songs." Kanye West's album Graduation, as well as 50 Cent's album Curtis, were released on the same day. Kanye West and 50 Cent were in the midst of a competitive sales war, with 50 Cent claiming he would end his solo rap career if West sold more albums than he did (remarks he later retracted as terms with of contract conflicted with the promise). Chesney decided he would give country music a place in the competition, claiming country artists were just as popular as rap artists. Chesney came in third place in the number of record sales between the three musical artists.

The album's lead-off single, Never Wanted Nothing More, became Chesney's 12th song to hit the top of the Billboard country charts. On the U.S. Billboard Hot Country Songs chart dated for the week ending September 15, 2007, Chesney's single Don't Blink debuted at #16, setting a new record for the highest debut on that chart since the inception of SoundScan electronic tabulation in 1990. This record was broken one week later by Garth Brooks' song More Than A Memory, which debuted at #1 on the same chart, making it the first song ever to do so. The third single off of just who i am album, Shiftwork, a duet with George Strait peaked at #2 on the Billboard country chart. During the week of June 28, 2008, the fourth single, Better As A Memory, became Chesney's 14th single to hit the top of the Billboard Hot Country Songs chart.

Chesney started his Poets and Pirates Tour on April 26, 2008 at Williams-Brice Stadium in Columbia, South Carolina. During the introduction of his set, his boot was caught between a hydraulic lift and the lip of the stage surface, crushing his foot and causing a severe hematoma from the ankle down, with most of the damage centering in his toes. It took approximately 30 seconds to pry his foot loose as he squatted down on the stage while the band continued to play an extended introduction of the song. When Chesney finally freed himself, he stood up and kept holding his hand on his knee as he began to sing. Chesney did not acknowledge the injury during the early part of his performance. However, he was visibly limping and seemed to rest near a drum riser while leaning over and holding his knee during the instrumental breaks of his hit songs. As he came offstage, a doctor from the University of South Carolina cut off Chesney's cowboy boot and immediately began treating the foot injury. X-rays taken later revealed several crushed bones in his right foot.

The injury did not cause him to postpone any shows, saying "He (the doctor) told me it's going to hurt ? though nothing could hurt worse than Saturday, I don't think ? and they can give me something to deaden the pain when I get out there. I also have to have a doctor standing by should something give, but I'm going to tape it up, and I'm going to get out there."

On July 24, 2008, Chesney announced that he would be releasing a new single off an upcoming album entitled Lucky Old Sun. The song was titled Everybody Wants To Go To Heaven, and for the chart week of August 16, 2008, it debuted at #22 on the Billboard Hot Country Songs chart (it later became a #1 hit). The album was released on October 14, 2008. It was followed by a cover of Mac McAnally's 1990 single Down The Road.

Chesney's 2009 tour was titled the Sun City Carnival Tour and featured both small and large venues in order to keep his ticket prices down. The tour included a performance at Gillette Stadium again, marking the fifth year in a row that he played at the Foxboro, Massachusetts football field.

On May 19, 2010, Greatest Hits II was released with two new tracks. In February, Ain't Back Yet was sent to country music radio stations. The #1 hit Out Last Night was the lead single.

In July 2010, Chesney released The Boys of Fall as the lead-off single from his album Hemingway's Whiskey, which was released in September 2010. The song hit #1 on the Hot Country Songs chart for the week of October 9, 2010, marking Chesney's eighteenth number one hit. The second single from Hemingway's Whiskey, Somewhere With You, was released in November 2010. The song debuted at #35 on the country chart for the week of November 6, 2010. It then hit #1 in January 2011.

On April 29, 2011, Chesney announced he will begin working on a new studio album featuring the first single, Real Friends, written by Thomas Walker.

Tip Of My Tongue (CDS)

Songs For The Saints

Live In No Shoes Nation CD2

Live In No Shoes Nation CD1

Setting The World On Fire (CDS)