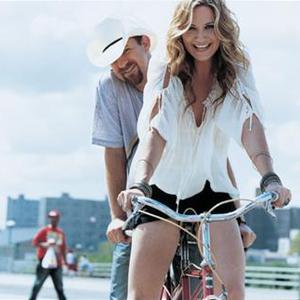 Sugarland's debut album, Twice The Speed Of Life, was released Oct. 26, 2004. Serving as its lead-off single was the song Baby Girl, which peaked at #2 on the Billboard Hot Country Songs charts and set a record for the longest chart run since the inception of Nielsen SoundScan in 1990. It was also the highest-peaking debut single for a group in 13 years. The album received Multi-Platinum certification for sales of two million copies. This album produced three more chart singles Something More, Just Might (Make Me Believe), and Down In Mississippi (Up To No Good).

In late 2005, the duo performed with Bon Jovi on Country Music Television's musical fusion show, Crossroads. Nettles sang with Bon Jovi on their single Who Says You Can't Go Home. The song later went on to become a #1 hit on the country charts.

On November 7, 2006, the new duo released their second album Enjoy The Ride. It sold 211,000 during its first week and opened at #4 on the US Top 200 and at #2 on the Top Country Albums charts. The first two singles from this album ? Want To and Settlin ? both reached Number One on the country music charts, while Everyday America and Stay were both Top Ten hits. A limited edition of the CD, sold exclusively at Wal-Mart, was released in late 2007 and included a 5-song Christmas EP. The EP contained one original song - Little Wood Guitar - written by Bush and Ellis Paul.

In 2007, Sugarland performed at multiple award ceremonies, including the 2007 CMT Awards and the 2007 ACM awards. They performed a cover of Beyonc&eacute; Knowles' "Irreplaceable" at the American Music Awards, with Knowles herself. They also appeared on the The Tonight Show, and late in the year they headlined their first concert tour: the Change for Change Tour along with opening acts Little Big Town and Jake Owen. At the 41st CMA Awards, the group won the award for Vocal Duo of the Year.

In February 2007 Nettles and Bush began recording Love On The Inside as a follow up to Enjoy The Ride. The album was released in late July. Leading off this album was All I Want To Do. Released on May 19, the song debuted at #27 on the country charts, the highest debut for the duo. It became their third Number One single in August 2008. Already Gone followed in September of the same year and in January 2009 became their fourth Billboard Number One.

The "Deluxe Fan Edition" of Love On The Inside was released on July 22, 2008. The fan edition includes the duo's collaboration with Little Big Town and Jake Owen, a cover of The Dream Academy's 1985 hit "Life in a Northern Town." It also introduces four other bonus tracks, including "Fall Into Me," "Operation: Working Vacation," "Wishing," and a cover of Matt Nathanson's "Come On Get Higher."

The duo is starting the Love on the Inside Tour on September 13 in Asheville, North Carolina and it will conclude after 25 performances on November 16 in Bossier City, Louisiana. They will be joined by special guests Ashton Shepherd and Kellie Pickler. It will be their second headlining tour.
In March 2009, Sugarland toured in Europe starting with performances at military stations in Italy. They were scheduled to perform in France, the Netherlands, Germany, England, Scotland, and Ireland. Later in 2009 they joined Keith Urban in select cities as part of his Escape Together World Tour and joined Kenny Chesney on his Sun City Carnival Tour.
The third single from Love on the Inside, and 11th single overall, "It Happens", was released in February 2009 and became their fifth #1 in May 2009. The album's fourth single, "Joey" is a warning about drunkdriving, encouraging those sober to "take the keys," and thematically is heavily influenced by Concrete Blonde's 1990 single of the same name. It peaked at #17 on the US country charts.

On May 19, 2009, Sugarland received five CMT Award nominations including a nomination for Video of the Year. They were presented the award for Video Duo of the Year at the award show that broadcasted on June 16, 2009. During the awards show, they also performed "Love Shack" with a surprise appearance by the B-52's.
On September 10, 2010, Sugarland appeared on The Today Show and performed "Stuck Like Glue" - the first single from their album The Incredible Machine, which was released on October 19, 2010 in the U.S., Canada, and Australia. The album was released in the United Kingdom on February 7, 2011.
It was announced on January 11, 2011 that Sugarland was the #5 selling country album of 2010 with The Incredible Machine and the #3 selling digital country track of 2010 with their single "Stuck Like Glue".
On April 3, 2011 Sugarland hosted and performed at the first annual ACM Fan Jam during the ACM awards show. Sugarland was nominated for Vocal Duo of the Year and Video of the Year for "Stuck Like Glue", and won for Vocal Duo of the Year at the 46th annual Academy of Country Music Awards. Nettles performed alongside pop star Rihanna at the ceremony, performing "California King Bed".

"Tonight" is the second single released in the U.K. from The Incredible Machine as well as the third country radio single, released April 11.

In April 2011, Sugarland began their own radio station, which was launched by A.P.E. Radio. The station is programmed by Nettles and Bush, and gives fans the opportunity to hear experiences from both singers' lives and from their current musical endeavours.

The duo appeared at the 2011 CMT Music Awards, winning for "Duo Video of the Year" but losing to Taylor Swift's "Mine" for video of the year. They also performed their donation song "Stand Up"

Live On The Inside

Love On The Inside (Deluxe Edition)

Love On The Inside