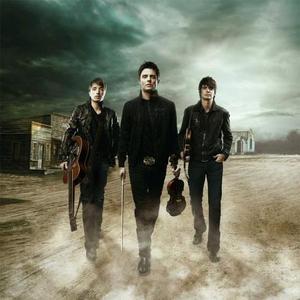 Originally from the small town of Rocky Mount, VA, Adam, Ashley and Austin literally grew up on the road playing music. Their father was a traveling evangelist preacher and the whole family traveled when their dad did. As each child became old enough to play an instrument he taught them whatever instrument was needed for the family band. He didn't teach them to read music notes and charts ? instead he taught each of the children to play by ear. And play they did ? in church, at bluegrass festivals, family gatherings and wherever else they could jam.

Adam plays mandolin, Ashley fiddle, and Austin dobro ? and they all play guitar. Their unique sound is a blend of their upbringing ? and in any Sons of Sylvia song you'll hear country, rock, bluegrass and gospel.

Adam, Ashley and Austin ended up living and making a living out of Nashville ? Adam has played with SHeDaisy, Ashley with Carrie Underwood and Austin with both SHeDaisy and Carrie. When they saw an advertisement for FOX's ?The Next Great American Band? they decided to make a video and enter the contest as The Clark Brothers. With their matchless sound and sparse instrumentation they progressed through various levels of auditions and were invited to participate in the show ? even without having drums or bass. It was a big decision for the guys whether to quit their jobs and take this chance or not, but with full support from their family they went after their dream. It paid off when they won the contest and scored a record deal on 19 Recordings//Universal/Interscope.

Since their win in December of 2007, the three brothers have been on a musical journey, writing songs and exploring who they are as a band. Over time they grew musically and realized their sound was heading in a new, different direction. It was a natural evolution which eventually led to the birth of the name Sons of Sylvia. They are currently working on their debut album expected to release in 2010.

?We have always wanted to make a record that comes from our heart. We want to inspire people with our music. We want to send a message of hope.?