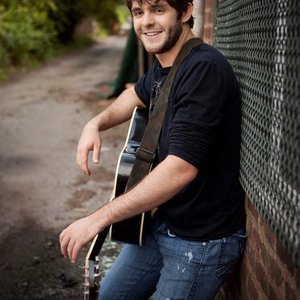 Thomas Rhett Akins, Jr. (born in Valdosta, Georgia) is an American country music singer known professionally as Thomas Rhett. He is the son of singer-songwriter Rhett Akins.[1] Here is some background information on Thomas Rhett from the Something To Do With My Hands Songfacts. Thomas Rhett grew up in the music industry by means of his singer-songwriter father Rhett Akins. Whilst studying business and communications at Lipscomb University in Nashville, Rhett formed a cover band and began playing frat parties and other gigs they could get.

His dad persuaded him to take the stage one night at a Nashville showcase, and EMI Music's Ben Vaughn, the same publisher who had signed his father many years earlier, offered Rhett a publishing deal.
Rhett co-wrote the song "I Ain't Ready to Quit" on Jason Aldean's 2010 album My Kinda Party and signed a recording contract with Big Machine Records' Valory Music Group division in 2011.[2] In early 2012, he released his debut single, "Something to Do with My Hands". The song received a positive review from Taste of Country writer Billy Dukes, who called it "clever, but not so cheeky that the joke tires after a listen or three."[3]

Country Again (Side A)

Christmas In The Country (MCD)

Look What God Gave Her (CDS)