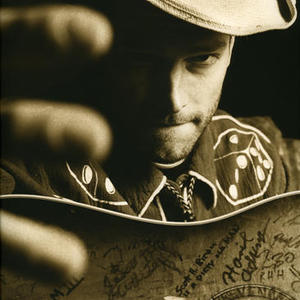 Shelton Hank Williams (born December 12, 1972 in Nashville Tennesee) is an American musician. He is sometimes credited as Hank III or Hank 3. The grandson of Hank Williams and the son of Hank Williams Jr., he spent much of his early years playing drums in punk rock bands. In 1996, child support payments led Hank III to sign a contract with Music City giant Curb. Three Hanks: Men With Broken Hearts was issued shortly thereafter, which brought the voices of all three generations of Williams men together.

The grandson of Hank Williams and the son of Hank Williams Jr., he spent much of his early years playing drums in punk rock bands. In 1996, child support payments led Hank III to sign a contract with Music City giant Curb. Three Hanks: Men With Broken Hearts was issued shortly thereafter, which brought the voices of all three generations of Williams men together. While this may seem to be a nice beginning, it was quite different from what Hank III himself desired musically. Despite having been born in Nashville, Tennessee, Hank III has never had a preference for mainstream country.

While his name (and his uncanny vocal and physical resemblances to his grandfather) could have guaranteed him a thriving country audience, he had no patience for the often predictable Nashville sound, nor for even the minimal constraints on behavior his promoters required. His opinions on this subject are well summed up in the songs "Trashville" and "Dick in Dixie".

His first album on his own, titled Risin' Outlaw, was released in September 1999. Lovesick, Broke & Driftin' was released in 2002. He had a great deal of trouble with his label Curb Records, with incidents as extreme as their unwillingness to either release his appropriately named This Ain't Country LP, nor allow him to issue it alone, and his selling of "F*** Curb" T-shirts. Battles with Walmart had delayed the release of his third studio album, titled Straight To Hell, which will be released on Feburary 28th as a two-disc in two formats: a clean version (for Wal-Mart), and an uncensored version, which will be the first country album to bear a parental advisory sticker on the cover.

He plays country with his "damn band" and produces a rather different sound with Assjack, which is a metalcore/psychobilly band. He is also the Bass guitarist in Superjoint Ritual, with former Pantera frontman Phil Anselmo. Superjoint Ritual has since disbanded but III is still working with Anselmo on one of his many side-projects (like Arson Anthem, mentioned below).

A number of "sub-sub-genres" have been coined describing his original sound, such as hard-twang, slacker swing, hellbilly, and honky punk.

Hank III has recorded the tracks "87 Southbound", "Thunderstorms and Neon Signs", as well as "Why Don't You Leave Me Alone", which were penned by Wayne Hancock, a musician who is often compared to him.

Hank III enjoys an extremely loyal grassroots fan base and much of his success can be attributed to his taper friendly stance regarding the audio/videotaping of his frenetic live shows which has been his main promotional vehicle considering the lack of attention paid to his promotion by the Curb Record label.

The Damn Band/Assjack also featured fiddle player extraordinaire Michael "Fiddleboy" McCanless who would play both sets, the traditional country set of the concert and then come back and plug his fiddle into a distortion box and saw away during the metal set. Sadly his talent left this world on February 3, 2003 after losing a battle with cancer, of which the cry of "Fuck Cancer" came out of Hank III's "Fuck Curb" campaign.

In late 2004 Thrown Out of the Bar was slated for release, but Curb opted not to issue it. Williams and label executive Mike Curb would be in and out of court for the next year before a judge ruled in favor of Williams in the spring of 2005, demanding that Curb release the album. Shortly thereafter Williams and Curb came to terms, and Williams dropped his "Fuck Curb" campaign. Bar was reworked into Straight to Hell, released on Curb's rock imprint, Bruc. Battles with Wal-Mart delayed the appearance of this album, which was released on February 28, 2006 as a two-disc set in two formats: a censored version (for Wal-Mart), and an uncensored version that was the first major-label country album ever to bear a parental advisory warning. One of the songs, "Louisiana Stripes" was written by a little-known Alabama teenager named Jeremy Cummings, who originally released the song on his 2004 debut CD Country Bullshit.

His next album, Rebel Within, was released in May 2010. It charted at number 20 in Billboard magazine.

Williams' former label Curb Records released Hillbilly Joker on May 17, 2011; this is his last release with the label. Williams had been involved in a long contract dispute with his Curb Records after the company refused to release his punk inspired CD This Ain't Country. Several of the songs on Hillbilly Joker had been available as bootlegs, some of them for nearly ten years.

On May 18th 2011, it was posted on III's web site that he is busy making new material / album which could be released very soon.

On June 23, 2011, it was posted on III's personal Facebook that he would be releasing four new CDs on September 6, 2011. It said to expect Country, Doom-Rock, Speed Metal with Cattle Callin on the releases. It also said that they would be released on III's own record label Hank III Records.

Take As Needed For Pain

Ghost To A Ghost