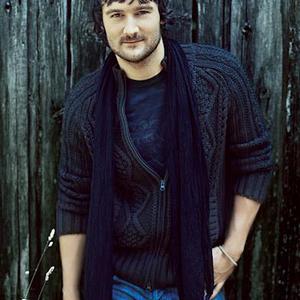 Eric Church is a country music singer and songwriter who released his third studio album, Chief on July 26, 2011, debuting at #1 on both Top Country Albums and the Billboard 200. The Homeboy Songfacts explains that the album's title refers to a nickname of not only the singer's grandfather, but also Church's own pet name among friends and family. Eric grew up in Granite Falls, N.C., in an area known as one of the world's furniture capitals.

Eric grew up in Granite Falls, N.C., in an area known as one of the world's furniture capitals. He recalls being 4 years old, standing on a table at a local restaurant, singing "Elvira" to a waitress and a handful of patrons who would reward him with change. He was 13 when he started writing songs, and he bought a cheap, hard-to-tune guitar and taught himself to play, influenced by his parents' eclectic tastes, which stretched from Motown to bluegrass.

At a little bar in the mountains of North Carolina, he watched a band called the Harris Brothers getting big tips for playing songs that he knew, and by the summer of his junior year, he had a gig of his own. His first gig was with M. Snow at Woodland's Barbeque in Blowing Rock. The wait staff eventually drove them off because of their ability to keep fans around for longer than desired hours. He quickly formed a band with Snow, his brother and another guitarist and was bestowed the name The Mountain Boys by several fans at one of their first gigs at a restaurant called Arizonas. The first night they knew just 14 songs, but they faked their way through a four-hour set and held onto enough of the crowd to help launch them as a regional act. In a year or so, Church was throwing original songs into the set mix and not long afterward was selling CDs of his own material. For two years, they played often in bars and restaurants in the Hickory, Lenoir, and Boone area.


Church played basketball, baseball and golf in high school, but in college, he turned to music. Before moving to Nashville, he graduated from college with a degree in marketing. In return, his father paid for his first six months in Music City.


The financial cushion his father had given him gave him time to make contacts. Six months in, he had to take a day job, but six months after that, he was signed to a publishing deal at Sony/ATV Tree Music Publishing. He began getting cuts, including Terri Clark's "The World Needs a Drink." Then, Arthur Buenahora at the publishing company introduced Church to producer Jay Joyce. The two clicked instantly and began cutting demos.


Following a showcase, Church signed to Capitol Nashville, with Joyce producing his debut album, "Sinners Like Me."

Through My Ray-Bans (CDS)

Hell Of A View (CDS)

Stick That In Your Country Song (CDS)