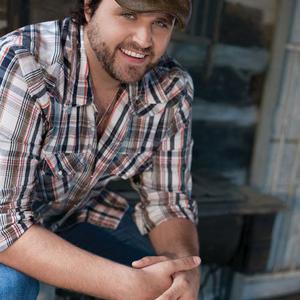 ?People are ready for real country music again,? says Randy Houser, and there are few people in a better position to give it to them. Blessed with one of his generation's great voices, he is also a world-class songwriter, penning hits for artists including Trace Adkins and Justin Moore, and a seasoned entertainer known for the passion and energy he brings to every performance. His debut album, Anything Goes, introduced him as an exceptional artist, someone with both a cutting-edge sound and a deep respect for classic country.

Blessed with one of his generation's great voices, he is also a world-class songwriter, penning hits for artists including Trace Adkins and Justin Moore, and a seasoned entertainer known for the passion and energy he brings to every performance.

His debut album, Anything Goes, introduced him as an exceptional artist, someone with both a cutting-edge sound and a deep respect for classic country. Fans, media and peers alike recognized that he possesses an artistic vision equal to his formidable talent. The strong reaction to his music was evident when David Letterman heard the album's powerful first single, ?Anything Goes,? and invited Randy to perform on the Late Show, introducing him to an even broader nationwide audience.

A searing portrayal of emptiness and loss, ?Anything Goes? rose quickly into the Top 20. Randy followed it with one of the rowdiest songs and coolest videos of recent years??Boots On,? which rocketed to #2.

Randy was named Country Aircheck's No. 1 New Country Artist in terms of airplay for 2009, and was a presenter and a nominee at both the ACM Awards (Video of the Year for ?Boots On?) and the CMA Awards (New Artist of the Year and Music Video of the Year), as well as garnering a nomination for the 2010 CMT Music Awards' Nationwide? Insurance On Your Side? Award.

At the awards show he helped host Kid Rock kick off the festivities with a surprise appearance on stage during a medley of "Cowboy," "Bawitdaba" and "Good Ol' Boys."

With one of country music's most promising young careers, Randy is taking a major step forward with his sophomore album, They Call Me Cadillac. ?I wanted to make a record I wanted to hear,? he explains. ?I put my heart into this, and the result is something I'm really proud of.?

From the beginning, Randy and co-producers Cliff Audretch III and Mark Wright agreed on a straightforward approach that focused on the meaningful lyrics of the songs. ?I want to catch people's ears not just with a guitar hook, but with the words. I didn't want too much going on around it.?

The result, recorded with Randy's own band, rather than studio musicians, is a stark and straightforward effort that does full justice to an artist heavily influenced by the classic works of idols like Johnny Cash, Merle Haggard, George Jones and Waylon Jennings.

The album covers a great deal of musical and thematic ground.

They Call Me Cadillac is an album that proves why Randy is among the most talented of his generation and of crucial importance to the genre.

Randy has been making music his own way since his earliest days in Lake, Mississippi. He was exposed to the best of the region's rich mix of music, including country, gospel, rock, and blues. He learned to love creating and playing music from his father, a professional musician.

?The funny thing is I've known this is what I wanted to do since I was five or six years old. I wanted to be an entertainer, a songwriter. I didn't know at that age I was going to have a talent for it. I didn't know about chasing girls or good times. It was pure and simple about something I really loved, which is music.?

For years Randy stayed closed to home, playing clubs all throughout Mississippi, but after his father died when he was 21, he decided to move to Nashville. His standout focal prowess voice impressed one person after another, and the connections kept multiplying. He earned a publishing deal and began turning out songs for Trace Adkins, Justin Moore, and Jessie James, among others.

It wasn't long before he began his own ascent up the charts as a recording artist. ?I spent a lot of years working my ass off to get lucky,? he says with a wry grin.

His passion for his craft shows not only in every cut, but also in every performance. ?When I go out there and sing, I cannot half-ass it. That's just part of the way I grew up. You go at something, you want to sell it. When I've got something to say, especially in a song, I want you to get it, so I'm not one of those quiet singers. I can't just lullaby you. I'm getting on it.?

The result is a mix of passion, talent, and showmanship that place him among this generation's most compelling artists. Combine those with the integrity he brings to his music and his knowledge of and respect for country music's traditions, and it's clear that Randy is on his way to becoming one for the ages.

They Call Me Cadillac