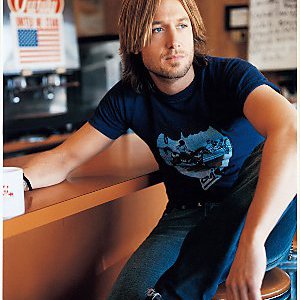 Keith Lionel Urban (born 26 October 1967) is a New Zealand-born country music singer, songwriter and guitarist whose commercial success has been mainly in the United States and Australia. Originally the front man for The Ranch, a three-piece group that released one album in 1997 to critical acclaim, Urban disbanded the group to pursue a solo career. In 2004 his album "Be Here" was nominated for best country album at the Grammy Awards and at the Academy of Country Music Awards.

Urban was born in Whangarei, North Island, New Zealand (on 26 October, 1967). Before he turned two years old his family moved to Australia. By age seven, Urban was already thinking about emigrating to America and making his mark in Nashville. Urban began to learn the guitar at age six and began winning talent contests at age eight. By twelve he was booking his band in local clubs, and at fifteen he quit school to hit the road. In 1990, Urban signed with EMI in Australia and recorded his first solo album, which charted four No. 1 country hits in Australia. In 1992, he moved to Nashville to pursue the largest country music market in the world. Originally the front man for The Ranch, a three-piece group that released one album in 1997 to critical acclaim, Urban disbanded the group to pursue a solo career.

In the late 90's Urban battled an addiction to cocaine. After reaching a personal rock bottom in 1998, he became determined to give up the habit and checked into Cumberland Heights, a treatment center in Nashville. After cleaning up, Urban released his self-titled American debut in 2000, achieving three top 5 hits and securing the title of Top New Male Vocalist Award at the 2001 Academy of Country Music Awards. Urban, openly regarded as a modern day guitar virtuoso, has performed as a session musician on albums such as Garth Brooks' Double Live and the Dixie Chicks' Fly.

In an attempt to gain more exposure, Keith then appeared semi-nude in an interview for Playgirl magazine's April 2001 issue. The publicity attempt worked as Keith was on the cover of the magazine's readers' most requested issue.

Keith Urban released Golden Road in 2002, and the success of the single "Somebody Like You" sent his career into high gear. The single spent eight consecutive weeks at the top of the charts, remaining at No. 1 longer than any other country artist in 2002. Three other singles were released, two went to No. 1 and the third was No. 3. The album went platinum in every country where it has been released and is triple platinum in the United States. In 2004 Be Here was released and nominated for best country album at the Grammy Awards and at the Academy of Country Music Awards. Out of the five singles released from Be Here, three went No. 1, and two fell just shy of that mark to land at No. 2. In 2006 the album went triple platinum in the U.S. Urban has also released Days Go By, a greatest hits collection, in Europe. With a career total of 13 singles released, seven singles went to No. 1, two went to No.2, two went to No.3, one went to No. 4, and one went to No.18.

Touring as a supporting act for renowned country acts Brooks & Dunn and Kenny Chesney honed Urban's skills and stage-craft. Country video channel CMT signed on as the title sponsor of Keith Urban's first headlining arena tour titled Keith Urban Be Here '04. Urban continued his meteoric rise to fame in 2005 with the very successful Alive in '05 tour. He performed in the Live 8 Philadelphia concert on July 2, 2005 and had been chosen by The Gap to appear alongside seven other musical stars in their "Favorites" campaign. In 2005 he was named CMA's Entertainer of the Year. He released a DVD in late September entitled Livin' Right Now, recorded in California on December 2004. Urban performed "Better Life" on the CMA Awards and "You'll Think of Me" on the American Music Awards. He also performed at the Grammys playing "You'll Think of Me" and "The Lucky One" with Faith Hill. At the 2006 ACM Awards Urban gave two performances when he performed "Tonight I Wanna Cry" and played guitar for Brooks & Dunn's song "Believe."

Personal life
On arriving in Nashville, Tennessee in 1992, Urban quickly fell for veterinary technician Laura Sigler. The pair shared an on-off relationship from 1992, and lived together between 1998 and 2002. Urban paid tribute to Sigler in the sleeve notes to his self-titled first hit album, and dedicated love song "You're The Only One" to Sigler, writing "For Laura" at the bottom of the lyrics. After proposing to Sigler in 2001, the pair broke up in 2002.

In 2002, after his painful breakup with Sigler, Urban met supermodel Niki Taylor, who played his love interest in his music video for "Somebody Like You." Taylor had told her hair/makeup person, Debra Wingo, that she might be interested in being in a country music video. Wingo also does hair/makeup for Urban, and she mentioned that he was getting ready to do a video. Urban and Taylor dated on and off for three years until their split was officially announced July 2005.

Urban met actress Nicole Kidman at an event in Hollywood in January of 2005. In May of 2006, Urban and Kidman announced their engagement, and their plans to wed in Australia. They got married in Australia on 25 June 2006 at the Cardinal Cerretti Memorial Chapel in the grounds of St Patrick's Estate, Manly, Sydney.

One Too Many (CDS)

THE SPEED OF NOW Part 1

I'll Be Your Santa Tonight (CDS)