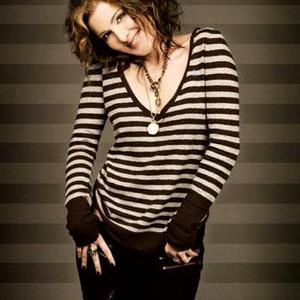 Sarah Buxton grew up in Lawrence, Kan., and became actively involved in music as a child by learning piano, playing flute and joining a children's choir. She sang Patty Loveless' "Blame It on Your Heart" at a talent show as a junior in high school. As she learned more about music, she became interested in songwriters and began writing poetry. After graduation, she met one of her musical idols, Stevie Nicks, who encouraged her to pursue music, which meant a move to Nashville.

Buxton enrolled at Nashville's Belmont University and started a Southern rock band called Stoik Oak, which toured the region for three years. After an 18-month engagement, she married the band's guitarist when she was 22. However, they divorced shortly afterwards. She also felt discouraged about finding a place for her unique-sounding voice in the music business but found further encouragement from one of her friends, John Rich of Big & Rich. She asked her publisher to set up some co-writing sessions, and she became more confident in her approach to singing and songwriting. Buxton is expected to release her debut album on Lyric Street Records in 2007.

Sarah Buxton's debut album is slated for release by Lyric Street sometime in 2007, but it has been delayed several times.

Her single, "Innocence," was released, but did not burn up the charts. One of the album's tracks, "Love Is a Trip" was used by ABC to promote its "Men In Trees" drama series last summer/fall.

Buxton has been featured on many albums as a backup singer. These albums include Kenny Rogers' album Water and Bridges; Cowboy Troy's Loco Motive; and John Corbett's eponymous debut album. She has an album of her own coming out in 2007. Keith Urban also sings a version of her song "Stupid Boy" (which Buxton co-wrote) on his album Love, Pain & the whole crazy thing. The album also features Buxton singing backup on the track "Tu Compa??a".