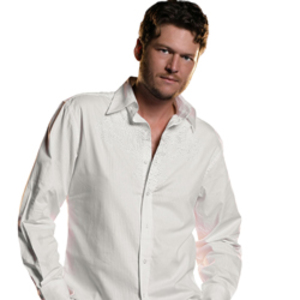 Blake Tollison Shelton (born June 18, 1976) is an American country music artist. In 2001, he made his debut with the single "Austin". Released as the lead-off single from his self-titled debut album, "Austin" went on to spend five weeks at Number One on the Billboard Hot Country Songs charts. This song was the first single from his gold-certified debut album, which also produced two more Top 20 hits. Although the album was released on Giant Records Nashville, Shelton was transferred to Warner Bros. Records Nashville after Giant closed in late 2001.

His second and third albums, 2003's The Dreamer (his first for Warner Bros. proper) and 2004's Blake Shelton's Barn & Grill, were each certified gold as well. Shelton's fourth album, Pure BS, was issued in 2007, and re-issued in 2008 with a cover of Michael Bubl?'s pop hit "Home" as one of the bonus tracks. This cover was also that album's third single. A fifth album, Startin' Fires, was released in November 2008. He is currently a vocal coach on the NBC reality talent show The Voice with Adam Levine, Christina Aguilera, and Cee Lo Green.

Come Back As A Country Boy (CDS)

We Can Reach The Stars (CDS)

Jesus Got A Tight Grip (CDS)