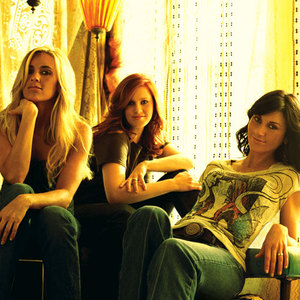 It has always been about the songs. SHeDAISY's place in the music world begins with Kristyn Osborn's songwriting, with her ability to probe her psyche and, by extension, ours. The fact that she and sisters Kelsi and Kassidy are equally adept at placing those songs in intriguing and memorable settings, at making them come alive in the studio and on stage, is the rest of the multi-platinum equation.

As their winding career path makes clear, though, nothing important is ever established or sustained without struggle and re-evaluation, without the willingness to adjust course now and then. Theirs has been a journey for which they have drawn strength from both success and misadventure, turning missteps into lessons and challenge into triumph. The result is a hard-won artistic maturity, and the CD that embodies the latest phase of their journey, Fortuneteller's Melody, represents a liberating step forward.

The process began, as always, with Kristyn's songwriting. As Kelsi and Kassidy took to the road for a radio tour accompanying the release of Sweet Right Here, a rebound record which went gold and gave the trio renewed momentum, Kristyn spent more than three months turning the stuff of life into art with the help of collaborators that included Don Schlitz and Sheryl Crow.

From there, though, everything was new. The trio chose to work with Grammy producer of the year and another Kristyn songwriting collaborator, John Shanks, known for his work with Melissa Etheridge, Keith Urban, Kelly Clarkson, Alanis Morissette, Bon Jovi and many others. In working with him, they re-invented the way they make records: instead of the meticulous planning that went into earlier efforts, they worked almost off-the-cuff.

"We would walk into the studio this time not knowing the song," says Kristyn. "John and I would be finishing one in the other room then we'd go straight in and record it. Kassidy might learn it as I was finishing the lyric. We were allowing the songs themselves to take control, rather than our arrangements of the song."

"It freaked me out because I love to be prepared," says Kassidy. "With the other records, we would arrange songs for a month and then go into the studio totally ready, but I surprised myself this time. There's freedom in this approach, and there's something great and fresh about that."

The result was a recording process that echoed the approach of songwriting.

"It forces you to draw from a place that's beyond the surface," says Kristyn. "You find things in yourself that you didn't know were there. For Kassidy, it's her voice. 'Where are those licks going to come from?' 'Where is the soul going to come from in the music?' John just made us find it."

What held it all together was the consistency of voice in Kristyn's writing, the nuanced look at life, love and redemption that made up the project's songs.

"This is about relationships," she says. "It's about life and love and being on the road and being in a family and what happens when there's drama and trouble and tragedy. You can see the growth of the character and the life experience, and then you see the conclusion. It's also very honest. I don't feel like I'm shielding the truth here." She calls it "a grown-up record with elements of fun and youthfulness."

The upshot is that Fortuneteller's Melody, recorded in Los Angeles and Nashville, unfolds like no SHeDAISY album before it.

"In our other records," says Kristyn, "we talk about each song being a little snapshot or a mini-movie, but this new record presents an entire story, from song one through twelve, with each bleeding into the next."

It is a story drawn from experience.

"I was always a little tentative about just throwing everything out there," says Kristyn, "especially when it's really personal. These are all journals for the most part, but that is the blessing and the curse of writing your own material and letting people see what it's like on the inside of you rather than just the outside. I don't feel so restricted this time. I feel like we don't have anything to lose. We have a lot to say and we are in a really liberating place right now, so it was just a different approach. I don't need to mask anything. I have nothing to worry about. It feels good."

As much of a departure as it is, Fortuneteller's Melody is, given their history, the natural next step in SHeDAISY's incredible journey.

Kristyn, Kelsi and Kassidy Osborn grew up in Magna, Utah, raised, as their father says, "on the three B's--Beach Boys, Beatles and Beethoven." Kelsi and Kassidy sang and performed in local theater, then began singing at retirement homes, churches, and in the neighborhood. Kristyn took part for a while, lost interest during high school, then regained it during a trip to New York to accompany Kelsi on a TV audition. Kristyn then accompanied her father to Nashville for a music business seminar, and a few months later, with Kelsi and Kassidy still in junior high, they moved to Music City. Within a few months they had landed and lost a record deal, recording an unreleased album.

They spent five years working in mall department stores and playing clubs at night, honing their craft, while Kristyn and Kelsi began attending classes at a local university to learn every aspect of the business.

"I learned how we had been taken advantage of," Kristyn says. "We recorded a project for RCA that never got released. That album was missing something and it taught me a lesson. We did what we were told. We didn't stand up for ourselves because we were so young. We were told to do a song and we did it. There were only three of our songs on there."

Gradually, their hard work and Kristyn's education paid off and, in 1997, they signed with Lyric Street Records.

Their first album, The Whole Shebang, rode unabashed exuberance, clever writing and aural brilliance to double platinum status, launching SHeDAISY into the mainstream of modern country music. "We had years to prepare for that record," says Kelsi, "and there was no one saying, 'You can't produce a demo like that.' When we hooked up with [producer] Dann Huff, he helped those demos come to life even more. We just put it out and said, 'Here is our music.'"

Fans and radio were all over the record and doors swung open everywhere. "Little Good-Byes," "This Woman Needs," "I Will...But" and "Lucky 4 You (Tonight I'm Just Me)" all reached the Top 10. Nominations poured in from the Grammys, the CMA, the ACM, the American Music Awards and the Blockbuster Music Awards. The Whole Shebang spent 99 weeks on the Billboard Top Country Albums chart. The group released a re-mixed version of the LP and a well-received Christmas album.

"I think we were spoiled in the beginning," says Kassidy. "Once you've had that, you don't want to settle for less. The good thing is that means you'll keep trying to do better."

"Knock On The Sky was much more of a science experiment," says Kristyn, "and that was really exciting--'Let's try this' and 'Let's do that' and 'What if we stack these vocals?', but some people couldn't get past the sound to be able to hear the songs themselves. Sometimes when there's too much of a sheen people won't always take the time to hear what you're saying."

Kristyn calls Sweet Right Here, their third release, "our trampoline--a bounce-back. We stepped back sonically a little bit, and the record reflected the fact that things were a bit simpler in our lives." Hits like "Passenger Seat," the hilariously self-referential "Don't Worry 'Bout A Thing," and "Come Home Soon," a song and video still treasured by the families of servicemen and women, recaptured much of the magic.

"I think we came a long way back," says Kassidy. "We were able to re-establish ourselves with radio and our fans after more than two years without a new radio hit. Going gold was really a goal for us, and I think with this new record we will keep accelerating and reach higher goals."

Part of that acceleration is taking place on the road. The trio chose not to tour early on, preferring to wait until they had released more hits.

"We had so many opportunities to go on the road," says Kristyn. "If we'd started six years ago developing a live show, we'd be in a different place now, but we are in essence starting from scratch in the last couple of years. But that also means it's as enjoyable as when you're starting brand new. We're back in fresh that place and it's really nice."

"We've been working with this band now for two years," says Kristyn. "Our focus is on the live show, convincing people we can pull it off. We don't have any bells and whistles, we don't have any sets that move and we have no flames. We have no explosions. It's just a great show without all that stuff and we're proud of it. Our next step is to get out there in front of a lot more people."

Theirs is the gift of self-confidence born of the rock-solid foundations of family and faith, and the knowledge that while they continue to learn, they have given their all to their recorded output. It lets them stretch each time they re-enter the studio.

"Each record has got to be a challenge," says Kristyn. "We don't want it to be easy. This time out, we're not afraid of anything. It's a different world that we're all breathing in. I think we feel ready to say it, to tell it like it is, and we're proud of it."

The result is a CD that showcases the best of one of modern country music's most innovative and compelling acts, one that adds an exciting new chapter to their legacy.

Knock On The Sky