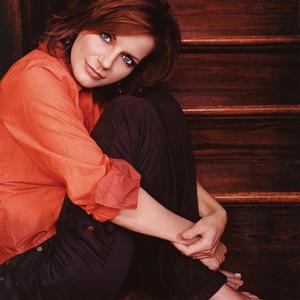 Martina McBride (born Martina Mariea Schiff, July 29, 1966 in Sharon, Kansas) is an American country music singer. Martina McBride released her honky tonk-flavored debut album The Time Has Come in 1992. Her first big hit was the single "My Baby Loves Me" from her more pop-oriented second album, 1993's The Way That I Am. She became even more visible in 1994 with the crossover success of her anti-domestic violence anthem "Independence Day", also from this album.

In 1995 McBride released the album Wild Angels; "Safe in the Arms of Love" and the title track were country hits, later being her first #1 hit. Her 1997 album Evolution sold over two million units, and included an adult contemporary crossover hit in "Valentine" as well as four number one or number two country hits. The album Emotion came out in 1999; "I Love You" was a big hit in both country and adult contemporary circles. So was the socially conscious "Love's the Only House", a trend that would continue with 2003's "This One's for the Girls", which would become the theme song for the 2005 NCAA Women's Basketball championship tournament. [1] This was followed by the hit singles "How Far" (written by fellow country singer Jamie O'Neal) and "God's Will".

The Long Distance Lullaby Songfacts states that Eleven was Martina's first album for Republic Nashville, ending a 20 year association with RCA. Label head Scott Borchetta encouraged her to write more songs for the record than she had on any of her previous 10 albums, and she ended up co-writing six of the 11 tracks. Eleven was released October 11, 2011.

As of 2005 McBride is generally recognized as one of the top female singers in popular music; with her strong and pure soprano voice she has been labelled "the C?line Dion of country music." Also in 2005 she released a 18-track CD of classic country music standards, which landed at #1 on the Billboard Country Album Chart in its opening week and received much critical acclaim for its authenticity towards traditional country.

"Independence Day" is used as the introductory music for Sean Hannity's popular talk radio show. McBride has appeared at benefit events organized by Hannity, but has declined to take an active political stance. [2] McBride has performed free for fans, such as in a July 3, 2004 show in Owensboro, Kentucky to celebrate the grand opening of the new Independence Bank headquarters.

Recently she helped out contestants on the Canadian version of "American Idol". The winner worked on a song with McBride as well as went on tour with her across Canada.

Martina has sold over 13 million albums in USA alone.

It's The Holiday Season