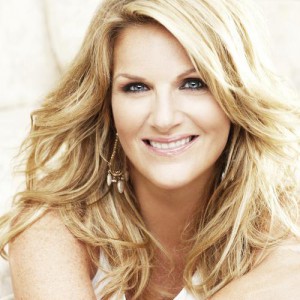 Trisha Yearwood (born September 19, 1964) is a three-time Grammy-winning American country music singer. She cites Linda Ronstadt as her biggest influence, and Ronstadt's sound and vocal stylings are clearly apparent in Yearwood's music. Other influences include Emmylou Harris, Patsy Cline, and Elvis Presley. Patricia Lynn Yearwood was born in Monticello, Georgia to Jack and Gwen Yearwood, and developed her musical talent in Nashville, Tennessee, where she interned as a receptionist for the local company MTM Records.

Patricia Lynn Yearwood was born in Monticello, Georgia to Jack and Gwen Yearwood, and developed her musical talent in Nashville, Tennessee, where she interned as a receptionist for the local company MTM Records.

Garth Brooks and Yearwood first met in October 1987 recording demos for songwriter Kent Blazy. The two immediately hit it off as friends, and pledged whoever made it big first would help the other out. When Garth landed a major tour in 1991, he brought Trisha along to open all of his shows. Even when they became two of the biggest country stars of the 1990s, they remained close friends.

Yearwood's self-titled debut album was released in 1991, and the lead single, "She's in Love with the Boy," went to the top of the country charts, making her an instant star. Yearwood secured similar success with the 1992 release of "Hearts in Armor", which featured the hit singles ?Wrong Side of Memphis,? and ?Woman Walk the Line?.

The title track of 1993's "The Song Remembers When" went to number two, and she followed it with a Christmas album, "The Sweetest Gift", in 1994; that year, she also won her first Grammy award. In 1995, Yearwood released her fourth studio album, "Thinkin' About You". The lead single, "XXX's and OOO's (An American Girl)" peaked at #1 on the Billboard Country Chart, her first #1 since her debut single, followed by her third #1 single, "Thinkin' About You". Yearwood performed at the closing ceremonies of the 1996 Summer Olympics in Atlanta.

In 1997, Yearwood issued her first compilation, "(Songbook) A Collection of Hits", which became her first album to top the country charts and also reached the pop Top Five. She won a Best Female Country Vocal Performance Grammy for ?How Do I Live?. Yearwood's two additional new singles from her Songbook album were major hits, "Perfect Love", which peaked at #1, and a duet with Brooks, "In Another's Eyes". Yearwood was also named "Top Female Vocalist" in 1997 by the Academy of Country Music and won the "Female Vocalist of the Year" award from the Country Music Association in 1997 and 1998.

In 1998, Yearwood won her third Grammy and released her next all-new album, "Where Your Road Leads". Yearwood was inducted into the famed and historic Grand Ole Opry in 1999, cementing her status as a true icon in country music. 2000's "Real Live Woman" was a more personal outing that reflected some of her heartbreak and turmoil caused by her divorce from her husband at the time. She released her eighth studio album in 2001, "Inside Out". The lead single, "I Would've Loved You Anyway" became a Top 5 Country hit, peaking at #4 on the Billboard Country Chart in 2001 and became her first Top 10 since 1999, and her last single to reach the Top 10 to date. Yearwood also played Lt. Cmdr. Teresa Coulter on the TV show JAG as a Navy coroner and forensic pathologist who aids JAG on several cases (seasons 3-7, 7 episodes).

After a three year hiatus from recording albums, Yearwood released her ninth studio album "Jasper County" in 2005. The album was a return to a more country sound than her last several studio recordings. The first single, "Georgia Rain," set the tone for the album, with Yearwood altering the lyrics to pay homage to her home, singing about "the Georgia rain on the Jasper County clay."

In late 2006, Yearwood announced she was parting ways with MCA Records. MCA then released a "Greatest Hits" CD on September 11, 2007. The album features two new songs, plus fifteen other tracks covering her career from 1991-2001. MCA also released "Love Songs" on January 15, 2008; an album made up of previously released tracks from her prior MCA albums. Yearwood's tenth album, "Heaven, Heartache and the Power of Love", was released by independent Nashville label Big Machine Records in November 2007, and spawned 3 singles, with the title track peaking at #19 on the Billboard Country Chart.

She married her first husband, Christopher Latham, in 1987 but the two divorced in 1991. Trisha married Robert Reynolds, the bass player for The Mavericks, on May 21, 1994, and they divorced in 1999.

On May 25, 2005, Yearwood became engaged to fellow country superstar and longtime friend Garth Brooks in front of 7,000 fans. On December 10, 2005, they were married in a private ceremony at the couple's home in Owasso, Oklahoma. It was Brooks' second marriage and Yearwood's third. Brooks has three daughters from his first marriage--Taylor, August, and Allie.

Trisha hit the country charts in 2006 with a duet with her husband called "Love Will Always Win". It was the fifth duet the couple has recorded; the others were "In Another's Eyes," "Where Your Road Leads," "Wild as the Wind," and "Squeeze Me In."

Yearwood lives on a ranch in Owasso, Oklahoma with husband Brooks and his three daughters. When she's not touring, she enjoys cooking, hiking, and reading. In April 2008, she released a cookbook entitled "Georgia Cooking in an Oklahoma Kitchen".

Heaven, Heartache And The Power Of Love