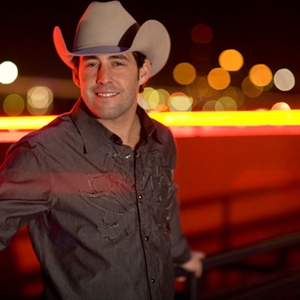 As one of Texas's hottest young touring acts, Aaron Watson has earned his musical stripes the hard way; on the road, traveling thousands of miles to hundreds of honky-tonks across the Southwest and beyond. And for this rising star, the payoff could not have been sweeter than one magical night this past February when he stepped on stage at the legendary Texas Hall of Fame in Bryan, TX, where so many heavyweights had stood before him, to record his latest release. For over 27 years, the Texas Hall of Fame has played host to the likes of Alan Jackson, Chris Ledoux, Gary Allan and many more.

Playing before a sell-out crowd of more than 2,000 people, Aaron delivered a scorching performance that marked the culmination of a relentless touring schedule, including more than 500 shows in 11 states over two years. 800 fans were turned away that night as the venue reached capacity, but thankfully, now everyone can share in the excitement of that evening with Aaron Watson's latest release, Live At The Texas Hall of Fame.

Live At The Texas Hall Of Fame is the follow-up to Aaron's highly successful 2004 release The Honky Tonk Kid, which was produced by Ray Benson of Asleep at the Wheel and featured Willie Nelson. ?I feel like our live show is the foundation on which my career has been built,? says Aaron. ?Since it's such a big part of what we do, it was natural for the next record to be live.? Fans will definitely get their money's worth from Live At The Texas Hall Of Fame. The album features 19 songs, including ALL of his hits like ?Off The Record? and ?Reckless,? as well as new material. ?I made this album using the same philosophy that I use for my live shows. I always want to give the fans the most music and best show I can for their money, because more likely than not, they had to work hard for it? says Aaron.

What's next? Rest assured that an aggressive touring schedule always tops his list. Still, no matter where he travels or how successful he gets, Aaron always stays true to his roots and the values he had when he started out. Born in Amarillo, TX and raised on country music, Aaron's first musical influence came from singing old gospel hymns at church. Later, inspiration came from Willie, Waylon, Merle, George, and?George. While attending college at Abilene Christian University and playing baseball, Aaron began to hone his vocal and musical skills, earning his chops on the local honky-tonk circuit and developing a strong local following in the process. It was also during that time that he became serious about songwriting, collaborating often with his close friend Neal Lowry.

Aaron has come a long way in a short time. A few years ago, he was traveling to gigs in a rental van with a modest 4-piece band. These days, he owns his own tour bus and shares the stage with 6 ace players in a full-blown band featuring fiddle and steel guitar. His touring base and radio airplay have extended beyond the borders of Texas to include Oklahoma, Louisiana, Wyoming, Tennessee, Kentucky, and North Carolina. With nearly 200 shows this year on the schedule, Aaron Watson is sure to play a date near you soon. If you get a chance to see him in action, it won't be hard to see why The Honky Tonk Kid is blazing such a hot trail across the country. You'll also be glad that when you're left wanting more, you can simply get in your car, turn on your stereo, and pop in a copy of Aaron Watson's new CD Live At The Texas Hall of Fame.